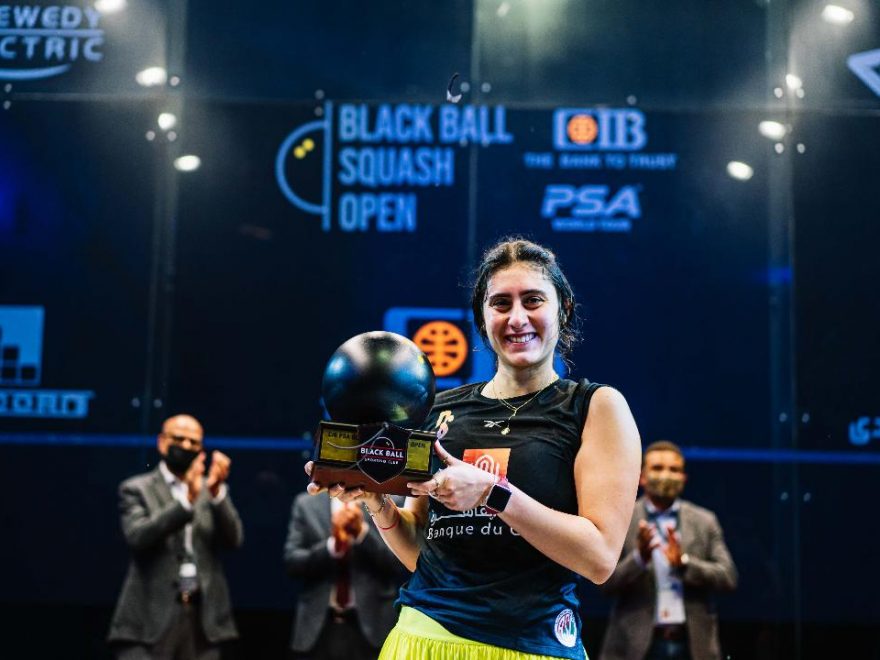 Best of Egyptian Photos so far

World Number One Nour El Sherbini should meet the title holder Sarah Jane Perry, WR6, in the quarters and would play CIB Hania El Hammamy, former BB Champion, in the semis if successful…

World No.2 CIB Nouran Gohar will get her tournament under way against experienced Englishwoman Alison Waters. Waters came within a whisker of eliminating the Egyptian at December’s Black Ball Open, only going down 14-12 in a nail-biting fifth game of their second round match.

Nouran is seeded to play France’s World No.3 Camille Serme in the semi-finals as both players bid to reach their maiden Black Ball Open finals.

In the men’s tournament, World No.2 Mohamed ElShorbagy will line up at the Black Ball Open for the first time since 2018. ElShorbagy, who reached the quarter-finals on that occasion, is hot on the heels of compatriot Ali Farag in the battle for the World No.1 spot and will look to bounce back from a surprise third round exit to World No.35 Youssef Ibrahim on his last PSA World Tour appearance at November’s Qatar Classic.

Mohamed is seeded to play World No.4 Paul Coll in the last four, while younger brother Marwan ElShorbagy and tenacious Welshman Joel Makin also feature on his side of the draw.

Farag also has a dangerous path to the title decider and is seeded to play defending champion Fares Dessouky in the quarter-finals, before a prospective semi-final matchup with World Champion CIB Tarek Momen. CIB Karim Abdel Gawad, the 2018 Black Ball Open champion, is predicted to play Tarek in the quarter-finals.

Ahmed Ismail and Ahmed Wael take the wildcard spots in the men’s tournament and will play Mexico’s Cesar Salazar and Malaysia’s Eain Yow Ng, respectively. Malak Fathy and Nadeen Kotb have been named the women’s wildcards. Fathy will take on USA’s Sabrina Sobhy, while Kotb will come up against England’s Julianne Courtice.