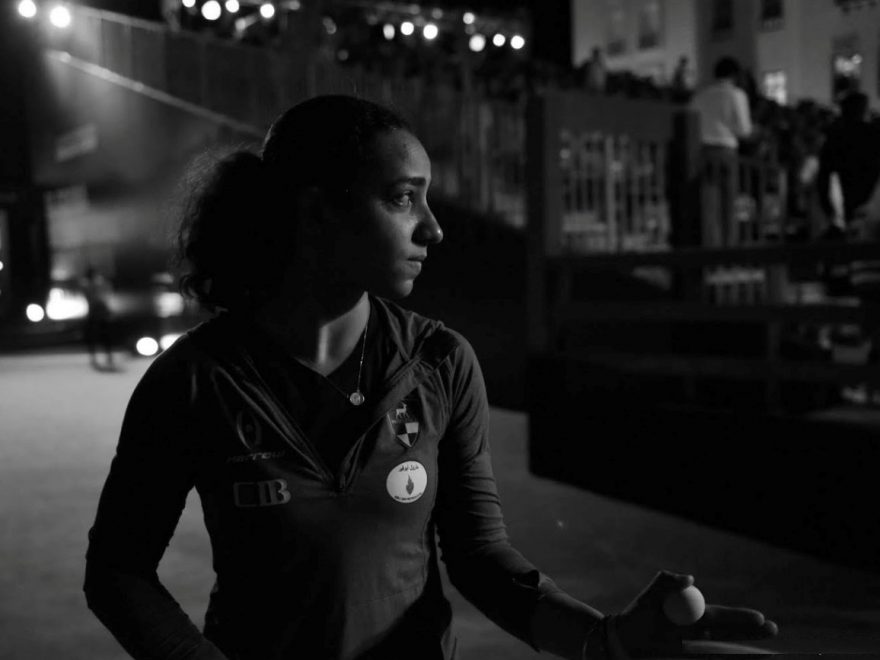 Miror Miror who is the ….

Nicol David is the most successful and most feted woman player of the modern era; Susan Devoy remains perhaps its best player; Heather McKay’s unbeaten sequence in the amateur era made her a legend by comparison with champions in any sport.

But only Raneem el Welily became the Queen of Hearts.

Most often she is described as the only Arab woman in any sport to become a world number one, and hopefully this brings better opportunities for women in many walks of life throughout the Middle East. Welily also gets a mention in the Guinness Book of Records, alongside husband Tarek Momen, as the only married couple to become world champions in the same sport.

She also took part in Egypt’s four world team titles, lifting the morale of a beleaguered nation confronted by harrowing obstacles. The most recent of these successes was achieved by a quartet – Welily, Nour el Sherbini, Nouran Gohar and Nour el Tayeb – which was perhaps the strongest women’s team ever.

Some will recall with sympathy the extraordinary 2014 world final in Cairo in which Welily held four match points against David, and still couldn’t quite make it. But they never saw how creatively she dealt with the bitterness.

For some people, the pleasure in these achievements was tinged with dismay that Welily could contemplate retirement while still the world number one. After all, she had maintained that eye-catching status for 19 consecutive months until the sudden sad farewell.

Nick Matthew, three times a world champion, tweeted: “Wow! This is truly a shock! World number one and at the top of her game.”

But it was the way Welily gained the affection of thousands of people all over the world which was her really special achievement. The wrench however revealed Welily as by far the most popular player on tour.

How do we know? In many different ways. 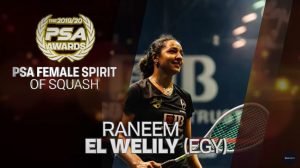 To begin with, through the Spirit of Squash, an accolade she won for the last four years in succession. Awarded to a player on tour best demonstrating true sportsmanship, it is decided by votes from fellow players, and it showed what they thought made Welily so special.

The sharpest insight came from Rachael Grinham, a former world number one and extremely cognisant of competitive psychology. “Not many players win all the titles and still have the utmost respect of literally all their peers,” she observed.

Though Welily is one of the most talented players to pick up a racket, with a special ability to perceive many shot-making choices in different situations, her qualities are not quite unique. Her attitude to her fellow players, however, is.

Much is often revealed by the manner of someone’s parting, and Welily’s retirement announcement generated fulsome responses.

The mood was best captured by her fellow top ten player Amanda Sobhy. “What an unbelievable role model, player and person,” Sobhy wrote. “One of the most skilled and exciting players, but also an absolute gem of a human being and person.” 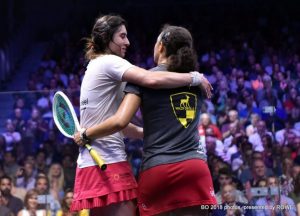 Nour El Sherbini, though a perennial rival, described Welily simply as “like a sister.” It was no facade.

Personal warmth flowed from another world number one, Mohamed ElShorbagy. “I’ve known Raneem since I was 10, and she was always the most genuine person,” he said. “She led the way for women’s squash in Egypt and was always a great role model to all of us. We became world champions together and that made it more special for me”.

Jenny Duncalf, the presenter, commentator and former world number two, admitted: “Selfishly I am so gutted about Raneem retiring. For me she is the best thing about women’s squash. Her talent, warmth, humour and intelligence led her to be the most respected player on the tour.”

Husband Tarek admitted it had created “a roller coaster of emotions” and that it was “a bit sad witnessing the end of an era – but we take some comfort in starting our own family. Goodbye legend. New beginnings.” 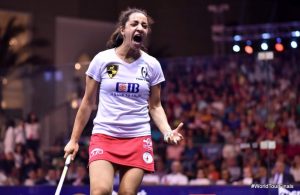 Her popularity was also aided by public admissions of shortcomings in temperament, and even by her confession that on a couple of occasions she had cheated. She had faults and was prepared for people to know it. Perhaps what most endeared Welily to ordinary people was being able to relate to her struggles. Although her skills were often brilliant, her mindset sometimes wasn’t.

Welily tries to do what she believes is right, even when it is inconvenient or difficult, which it often is. “If I do the right thing, maybe others will say, ‘hey, I want to do the right thing too’,” she says. “As cheesy as it sounds, if you want to improve the world, just improve yourself.” She adds: “You don’t change the world by becoming world champion.”

There may have been empathy too with her statement – superficially surprising – that squash was only a small thing in her life. Contributing to the human condition was far more important. 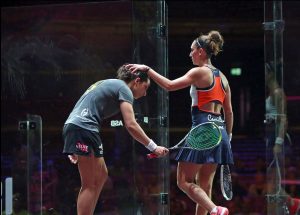 Much of this is remarkable. It is rarely easy to pursue the highest ideals while coping with the toughest competition in the world. But people noticed Welily’s attempts to do this – succeeding with remarkable frequency – and appreciated them.

Her humble empathy hooked fans and spectators all over the world who warmed to Welily’s capacity for self-criticism. They heard her admit that sometimes she failed when she had hoped to succeed, and felt they had something in common with her.

It took time to supplement her multiple shot-making options with better decision-making. She had to work long and hard at reducing tension and clearing her mind. It took time before she came to realise that if her body was tense, it might indicate that it came from her mind. She had to learn to perceive physiotherapy as not just about injury prevention but as an insight into psychology too.

She once memorably confided how her mind was divided. “I’ve always said there are three of us – there’s me, then there’s Raneem, and also myself,” she said, seriously but tinged with humour.
“Sometimes we fight – and sometimes we are at peace,” she added. It was a light-hearted view of the mental divisions that may be in many of us.

For those wary of psychoanalysis, there were more day-to-day descriptions. “I have always been tense,” she acknowledged. “The pressure has got to me more than once. But I became happy to achieve relaxation and enjoy moments on court more often.” 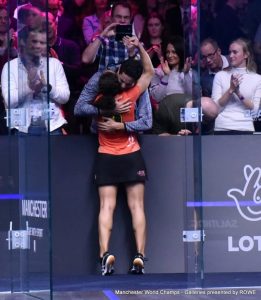 This was what happened at Manchester in 2017, when at last she won the world title. At times she was indeed more relaxed, although quite why that happened in this place at that time is unclear. “I thought if it was not meant to be it was not going to be – and that’s why I was relaxed,” she explained, revealing fatalism in her make-up.

But when age was mentioned she was different. She became critical that it had taken so long – until aged 29 – to achieve some mastery over her tension. “You look at the others,” she said, referring to Sherbini, Tayeb, Gohar, “and they achieved mental stability quite early”.

She has a particular attention to detail. Each shot and every decision plays a part in defining who she is, she claimed. “You are always at a crossroads, choosing which way to go,” she said. “But usually before a big decision I just sit down and think about things. And whichever way I choose, I follow that to the end.”

Her biggest decisions, she said, are made last thing at night. “After everyone has talked to me and after I’ve listened to everyone, and asked for opinions, how I feel before I sleep is the most honest thing for me,” she said.

But self-knowledge brought a deeper perspective. “It’s really about the journey I’ve enjoyed, about growing, about people, and setting goals and going after them,” she said. “I am not materialistic. It’s more about the journey and life and enjoying time, and making others happy, and being happy.”

It was actually Reeme Mansi, who tweeted the appellation “Queen of Hearts.” Raneem’s mum.

Mums have been known to exaggerate the qualities of their offspring. But not Reeme.

She got this one right. 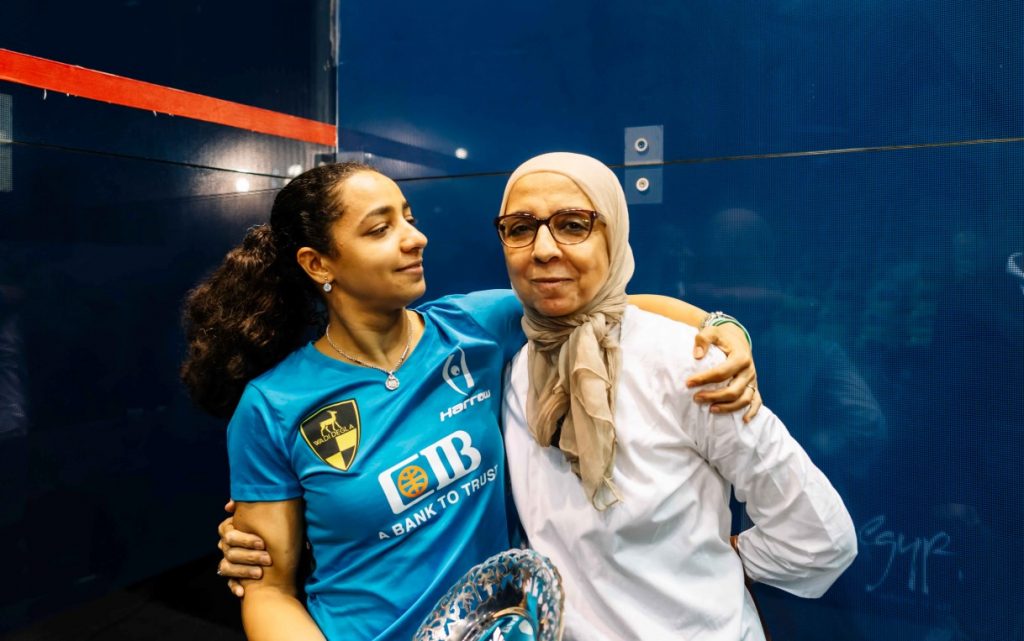