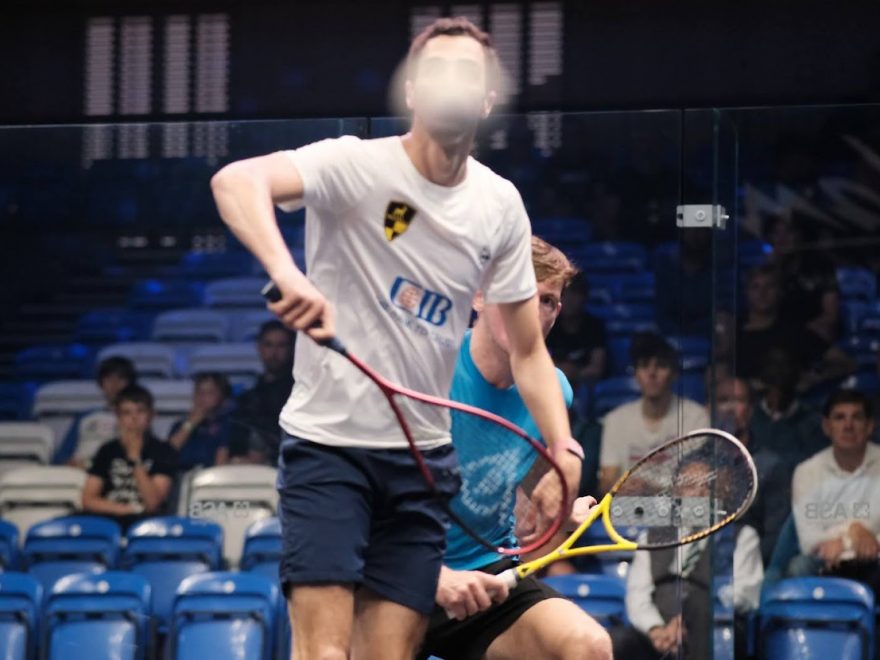 “I’ve played so much squash in my life but I’ve never experienced something like [Soliman’s lost tooth] . I‘ve so much respect for him, he’s such a great player. I told him after the match this is the first step for him, his first quarter, his first-ever British Open to play in. What a remarkable achievement for him. Today he left it all out there, it was definitely a fifty-fifty at the end and a little bit of experience here and there got me through.

“In El Gouna , World Series final, World Champ, here. Three finals, semis here. I’ve been having a pretty tough schedule. I’ve been having to play the last match of the day, every single match of every single tournament. I’ve had to finish at 10 PM now. So I definitely have much less time to recover but listen, I never give myself an excuse. I’m going to have a 24-hour break, or a 20-hour break to get myself ready for a big battle with Paul. If he gets the better of me tomorrow, it’s because he played a better match than me and I’m definitely going to leave it all out there. I’m gonna take everything away from him and if he beats me fair enough, he will have played better on the day, no excuses. I’m going to give everything tomorrow and I’m really excited to step on court with him.

“[Paul’s] physically very strong. He’s one of the best strikers of the ball in the game. I don’t think he gets a lot of credit for how good he is as a ball striker. He actually hits the ball really really well. I enjoy watching the way he plays. I actually went to Birmingham last week to hit with him. He beat me 4-0! I’m not really proud of that so I hope I can do better tomorrow.

“I just want to say thanks to the crowd who stay for all the matches. You guys make it amazing for us. Whether you guys are cheering for me or my opponent, you always make it special. So thank you for staying for the last match of the evening.”

“It’s definitely a relief, I lost before to Joelle in three. Today I knew it was going to be a tough game. She had a very tough match yesterday, but she’s a very strong player and I knew I shouldn’t take that for granted. I knew she was going to come here today up for a fight and she definitely proved that. I’m so happy I was able to get through this and I’m really looking forward to tomorrow.

“I’m here, really focusing on one match at a time, one game at a time. I can’t be thinking about tomorrow when I’m having a tough match today. Every tournament I just think about the match I’m playing and when I reach and play against the top, like tomorrow against Nouran, it’s going to be a very tough one. I’m going to think differently, I’m going to make up a new plan, a different one.”

“I think playing against Nouran is definitely a challenge for me. Going on court with her I have to be carrying a whole different plan, she’s one of the strongest, maybe the strongest, on the women’s tour. She hits the ball really hard. That kind of player needs to have a different kind of gameplan so I can write one with my coaches and hopefully be able to execute it tomorrow.

🚨 🥯 @AliFarag did not take dropping the first game lightly! 😱

“I don’t know how much emotion I want to get out today, I’m not sure how much I want to say about how I feel. Very relieved to have won this.

“Mostafa is a top player, a very good squash player, very explosive and has a variety of shots that he can kill you with, just sometimes it doesn’t turn very pretty. I was not proud of myself with how I let it get in my head in the third and if I let more emotion out then I would lose it. That’s why I was trying to stay calm for the whole match, even now I have so much emotion inside, probably in the room I will be shouting at myself.

“I enjoy it when I play well, I don’t enjoy getting bageled or bageling anyone. I was thinking ‘should I keep going?’ and then I thought I should because I don’t want him getting any momentum back, but he came back strongly in the third. One game does not win you the match.

“The very last point is the one that counts the most and I was able to win that one. There are a lot of positives, I had a good game plan – I executed it well actually in the third but then I gave away three strokes and some errors and that’s very costly at this stage of the tournament. I’m just happy that I stayed calm and then you saw the ball getting colder at the end and I tried to take advantage of it. I’m very happy.”

“It was really strange to hear my name in the crowd today as I was playing Sarah. I thought everyone would be against me today, but it helps. You guys are very fair and encouraging me on the good points, so it’s good to have that. One of the main reasons I love to play here is because of you guys. I love to play in front of a British crowd, they are very knowledgeable about the game and really appreciate players here. I’m really happy to be back.

“SJ always does this. When you’re 2-0 up, like the past five or six matches, she came back against top players. I knew even if I was 2-0 up and won the second game 11-2 that wasn’t a reason to win the whole match. I was pretty happy with the way I dealt with the fourth game even though for the whole game I was down and at 9-6 down, I went for my shots and maybe she plays good shots, but I can as well. I was just trying to relax and calm down and just think even if I’m going to lose this fourth game, I need to attack and be brave. I’m happy with the mental side of it more than anything else.

“From a very young age I’ve always thought that technique is a very important aspect, even if I wasn’t playing the best shot if I have good technique it really helps. Even if I lose weight, I still have the power so that’s a good sign, I just think a clean swing and good technique will help you generate power. I’ve done so much solo practice to keep the technique consistent, it’s all practice and taking care of it.”

🗣️ "That's a good game for me. I know how big a deal it is for @Nadine1Shahin to be playing in this round."

“That was a good game for me actually, I know how big it is for Nadine to be playing in this round and I’m sure the excitement affected how she plays. I know she can play better than this, it’s just about time and experience and I’m sure she’s going to be back here again. I’m really happy with my performance and trying to be confident with my body this week. I’m playing another semi final, so until now it’s going good.”

“It never gets easier, the nerves are always on. You just try to work mentally more to overcome this feeling. I was in this situation many times and I struggled a lot with them and I’ve overcome some of them. I went through this phase, I’m glad I’m not the one now doing it.”

“For Amanda, it’s our fourth meeting this season and we’ve been playing in big stages in Platinum events now, so I think the way she’s playing in every tournament she’s really in good form this season. She’s playing her best squash ever. Every time is a good and tough match. I’ll try to forget all the past matches and just think of tomorrow’s match and there are a lot of things I have to focus on and have a good game plan.”