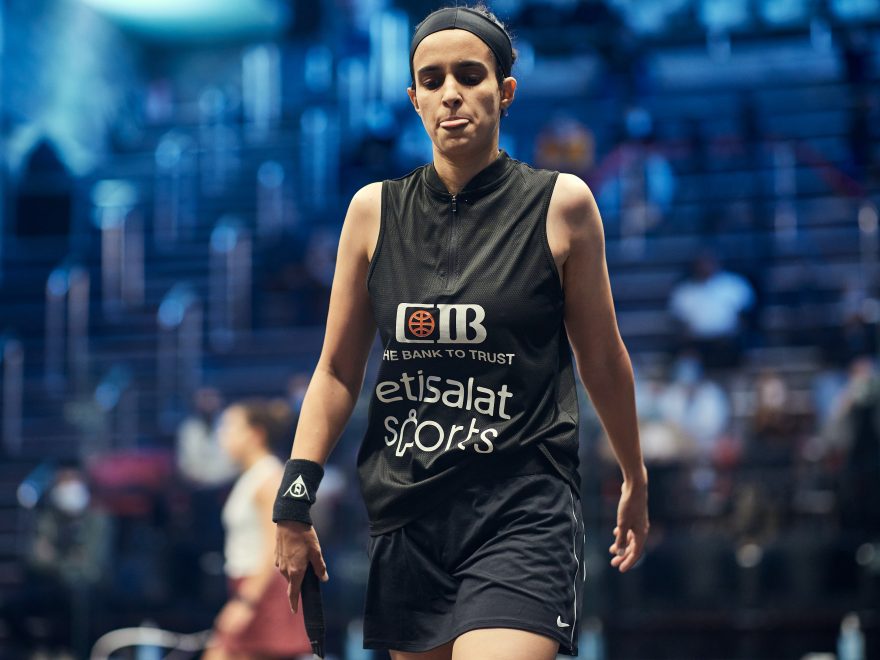 Former World No.3 Nour El Tayeb made a triumphant return to action after 14 months on the sidelines as she overcame fellow Egyptian Hana Ramadan to reach the quarter finals of the CIB Squash Open Black Ball – just five months after giving birth to a baby daughter Farida.

El Tayeb, who withdrew from the 2020 edition of this tournament last December due to her pregnancy, fought back from a game down to complete a stunning win over World No.33 Hana Ramadan, completing a 9-11, 11-7, 11-4, 11-8 victory to move into the last eight of the PSA World Tour Gold event held at the Black Ball Sporting Club.

The 28-year-old – who has slipped to No.9 in the PSA Women’s World Rankings – welcomed her daughter into the world in July of this year, together with husband and men’s World No.1 Ali Farag.

El Tayeb will lock horns with World No.1 Nour El Sherbini in the next round. El Sherbini was El Tayeb’s most recent opponent before this week, with the reigning PSA World Champion beating El Tayeb at the CIB Egyptian Open in October, 2020. El Sherbini booked her spot in the last eight courtesy of a comfortable 3-0 win over Belgium’s Nele Gilis.

🗣 "I think today was her 300th match, so you can’t take it for granted against Coline."

“It’s never easy to play an injured player, Coline is definitely one of the most experienced players on tour right now. I think today was her 300th match, so you can’t take it for granted against Coline. It’s always tough against her, we haven’t played for a while now but it’s always enjoyable. I’m just happy that I went on there and I was really excited to be on court today, I was finding my targets so that’s a positive thing today.

“Stoppages are part of the game, over the years I’ve learned how to cope with it. It’s tricky to play an injured player, I had the momentum, I wanted to keep it and didn’t want to stay longer on court, it’s already late so I just wanted to get the job done and onto the next one.

“The schedule is fair. Tomorrow I’m having another late match, so I have time to recover. I’m just going to do my normal routine, stretch, recover, do some physio work, have a good dinner and sleep and then fresh for tomorrow.”

🗣 "I know everyone here, so I’m always happy when I play on this court and I'm definitely taking advantage of that."@salmahany4 discusses her Black Ball win over @mariam_metwally 🎥 pic.twitter.com/1AIS6AuFJx

“Mariam is such a dangerous player. She has great hands and can hit a winner from any corner of the court. I’m definitely happy to be through today, it could have gone either way and I’m just happy to find a way through.

“It was a bit challenging because I felt like there was a lot of stoppages in the match. There were some patches where it was really fast and some patches where it was really slow and short rallies. It was a bit different to try and keep my body firing the whole match. I struggled out there today, but I just thought it was a situation that I had to manage and figure a way out. I’m proud of how I found a way today.

“I train here all the time, it feels like home. I know everyone here, so I’m always happy when I play on this court and definitely taking advantage of that. I’m just happy that I get to play another match here tomorrow.”

🗣 "The next round is going to be difficult playing Nour again, it’s amazing to see her back and winning."@noursherbini is looking forward to locking horns with @NourElTayeb once again 🎥 pic.twitter.com/8EYUIFII3Z

“I was really happy on court, I think my shots were working. It’s a tough first round for me and Nele has been playing really well, she’s very fit and I was trying to stop her getting anything back. I’m really glad I played well and my shots were good.

“This tournament doesn’t have any days off, so you always try to make it as short as you can. Keep your body good and make sure there is nothing wrong, you didn’t play a long match so you just keep going and you’re fresh in the next round.

“I think every match is difficult and you have to be ready for every opponent. I’m used to this situation, I’ve been in this place for a long time and the pressure is always on me because I’m the top seed. It’s hard, but I’m trying to work mentally to be relaxed and just play squash. Next round is going to be difficult playing Nour [El Tayeb] again, it’s amazing to see her back and winning. It’s always been a rivalry between us since we were juniors and have been travelling together, so it’s really good to see her back on court and to be playing against each other.”

🗣 "I had to do something, I had to come back to squash, its the only thing I can do well!"

We hear from @NourElTayeb as she marked her comeback with a terrific win just five months after giving birth to a baby girl 👶 pic.twitter.com/g5aWXg1lFP

“I’m very happy. I surprised myself with how I kept hope even after losing the first game. I felt a little bit emotional when I saw my parents here, I felt like when I was growing up and they used to come to my matches when I was still a child. To play this way and win was good, I got quite tense at the end.

“The biggest challenge is just leaving the house to train. I’m always tired and not sleeping very well so just to go and train was the biggest challenge. I missed the competition part of the game, like running and retrieving and obviously I’m not as quick but I’ll get there, I’m not seeing a lot of boasts now but I’ll get them. It was more than fine for the match so I’m happy.

“Obviously there’s always things to improve on in squash, but the main thing for me is to fight for every point, if I’m losing or the higher seed, all these things used to bother me, having now had Farida, I’m more relaxed about losing and if I lose I get to go home to a beautiful baby so I think that’s the main thing I’ll work on, but for squash, every shot needs to be better.

“I hope it’s a good message. I need a lot of help. I think for a woman to go back to work she needs a lot of help from her husband and family and thankfully I have that. For me, I had to do something, I had to come back to squash, its the only thing I do well.. I hope. I’m happy to have my family here for my first match and I can keep going with the comeback. It’s a nice challenge and I think I can do it.” 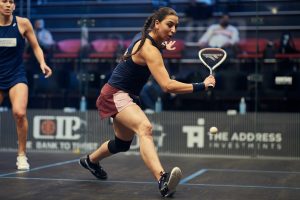 Jzzz, when I saw the line out I remembered that match, the only one they had played. It was on the same court, during the BlackBall March event, with Joelle cruising 2/0 and finally losing the match…

And from the start, the New Zealand was fighting tooth and nails to keep the upper hand on her young 19 years old opponent. And at 9/9 in the first game, Joelle managed to close the game, 8m. Excellent response from the Egyptian, 5/1, 8/8, and this time it’s Farida’s turn to close it down, 11/8 in 9m. 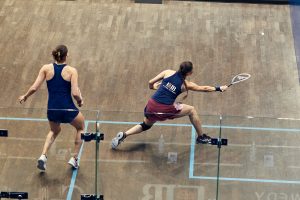 Third well, Joelle in complete control, and Farida just not really showing up mentally I felt.
Fourth is another huge battle, shots are heaving, deep at the back and well balanced with crispy attacks at the front from both girls. At 8/8 it’s all possible but Farida, with the belief that comes from being 19, Egyptian and playing on Egyptian soil, clinches it 11/9 in 13m…

The last game is nerve wrecking for both camps as Joelle seems in control 6/3, only to be caught out 6/6. Then it’s Farida’s turn to seem cruising along, 10/7, only to have Joelle forcing a tie-break, that the young Bazooka closes in seconds, Egyptian style, 12/10 in 13m…

🗣 "Joelle is very experienced and she wanted to take her revenge."

Another big win for Farida Mohamed over @Joelle_King – the Egyptian talks us through it 🎥 pic.twitter.com/4m9eOXKaek

“Joelle is very experienced and she wanted her revenge. It was very hard from the first point, I’m so happy with this win, glad I managed to focus at the end. I lost a bit of focus In the middle but glad that I could hold it together at the end to win.

“It’s interesting to play top players, the pressure isn’t on you but at the same time it is time for me to rise up the rankings. Every tournament I try to take something positive from it to push me harder and get big wins in every tournament.

“I’ve been working on plan Bs for my game. After this tournament I will carry on, i’m interesting to see what can happen with that.

“I went on in the fifth, trying to focus a lot. I was focusing well in one game then badly in the next, and so I tried to push hard in the last game because its the final game so I gave it everything, I went 10-7 up and lost 3 points so I pushed so hard to close out the game.”

“I really felt great today on court. She had a good week in Alexandria and I knew that tournament would give her a lot of confidence. I had to be well prepared mentally and physically and I’m really happy with my performance today.

“I have great memories and bad ones here, I have both. My first ever Platinum title was here, this club and this tournament has a special part in my memory and my career. Hopefully this year I can have another great run.

“I’m just trying to focus day by day, match by match, on my length and targets and everything just flows after. I tried to be as sharp as I can, recover as much as I can.”

🗣 “It wasn’t the best squash that I’ve played… I’m going to think more about my game plan and try to apply it on court better next time.”i

“What can I say? The first match in a while. I expecting a tough match against a tough opponent, first time playing Tesni, I knew it would be tricky so just very relieved to be through. It wasn’t the best squash that I’ve played. I couldn’t find my short shots, these are my strong shots usually so I think i’m going to think more about my game plan and try to apply it on court better next time.

“Today I was moving well, i’m injury free and my body is good so that’s a bonus and I will take that forward for tomorrow.” 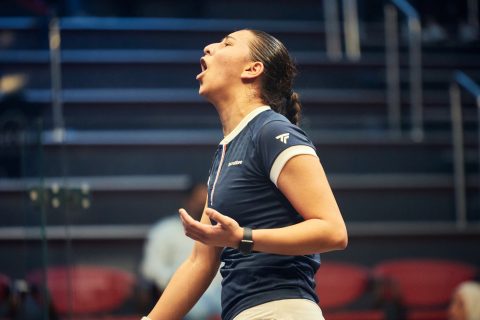