Nouran still at the helm… 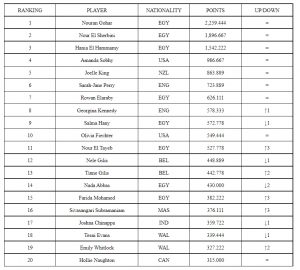 CIB Nour El Tayeb has taken a step closer to a sensational return to the top 10 as she moves up three spots to sit at No.11. The 29-year-old spent 14 months away from the game due to the birth of her daughter, but has been in tremendous form over the past two months, reaching the semi-finals of both the CIB PSA World Champs and the El Gouna International.

Mostafa Asal has broken into the top three of the PSA Men’s World Rankings after a sensational month which saw him win both the El Gouna International and CIB PSA World Tour Finals.

The 21-year-old is the youngest man since the legendary Ramy Ashour in April 2008 to feature inside the top three of the men’s rankings and captured the third and fourth major titles of his burgeoning career in June. 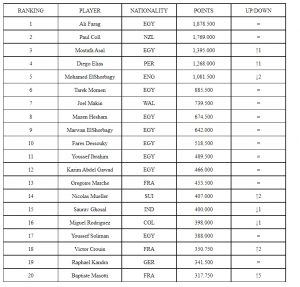 CIB Youssef Ibrahim and CIB Karim Abdel Gawad retain their places, with Youssef Soliman who stays at No.17.