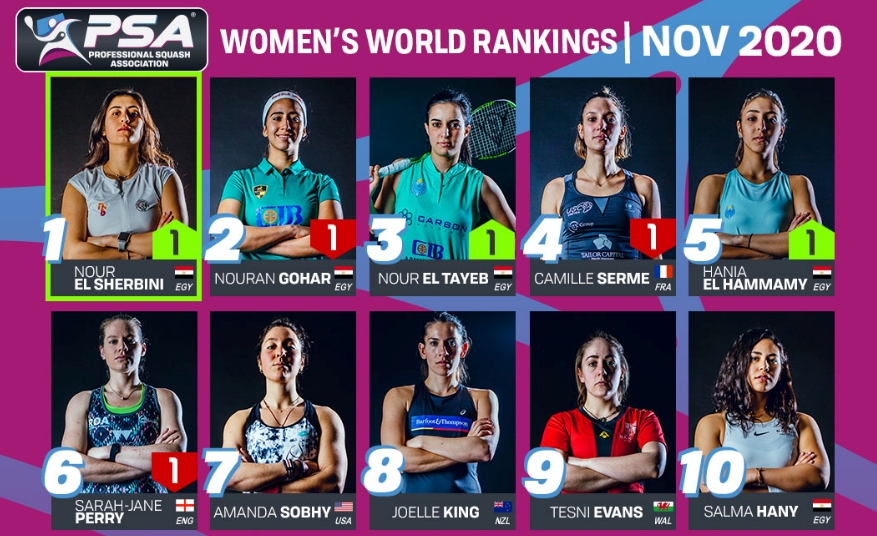 Nour El Sherbini has today gone back to the summit of the PSA Women’s World Rankings for the first time since November 2018 following her final victory over previous World No.1 Nouran Gohar at the CIB Egyptian Open two weeks ago in front of the Great Pyramid of Giza.

With 32 months spent at World No.1, El Sherbini – who turns 25 today – is the fifth-longest reigning World No.1 in the history of the women’s game, behind only Nicol David, Susan Devoy, Michelle Martin and Sarah-Fitz Gerald. 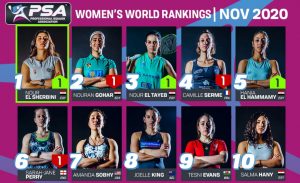 After falling to El Sherbini in the Egyptian Open title decider, CIB Nouran Gohar has seen her four-month reign at World No.1 come to an end and is now ranked 2. She is joined in the top five by CIB Nour El Tayeb, who moves up a space to overtake France’s Camille Serme, while 20-year-old CIB Hania El Hammamy moves into the top five for the first time in her career. CIB Salma Hany complete the top 10.

Rowan Elaraby rises two spots to a career-high No.14 ranking while Yathreb Adel falls two places to No.15 – you don’t get married every day – Nadine Shahin and Nada Abbas stay at No.17 and No.19, respectively.

If South Africa’s Teagan Leigh Roux has enjoyed the biggest movement on the women’s tour, rising 81 places to World No.227, well done to Egypt’s Amira Elrefaey, who has gone up 37 spots to No.252.

CIB Ali Farag has claimed the World No.1 spot for the first time since January, 2020 after the PSA Men’s World Rankings for November were released today.

Farag, the 28-year-old Harvard-graduate, captured the CIB Egyptian Open title in front of the Great Pyramid of Giza a fortnight ago and his run to the final in Cairo saw him end rival Mohamed ElShorbagy’s nine-month reign atop the World Rankings.

ElShorbagy drops down to No.2 but will have the opportunity to retake top spot if he wins the Qatar Classic – which starts today in Doha – and Farag fails to reach the final of the PSA World Tour Platinum event.

Meanwhile, World Champion CIB Tarek Momen has gone back up to World No.3 at the expense of fellow Egyptian CIB Karim Abdel Gawad, who misses out on Qatar due to injury.

CIB PSA World Tour Finals winner Marwan ElShorbagy rises to No.6, which is his highest ranking since December 2018 while CIB Mohamed Abouelghar rises a place to No.11, with Fares Dessouky going the other way to No.12.

World Junior Champion Mostafa Asal is rewarded with his run to the Egyptian Open semis with a four-place increase to a career-high No.14 with Mazen Hesham at No.15, Omar Mosaad No.16 while Zahed Salem falls two places to No.19.