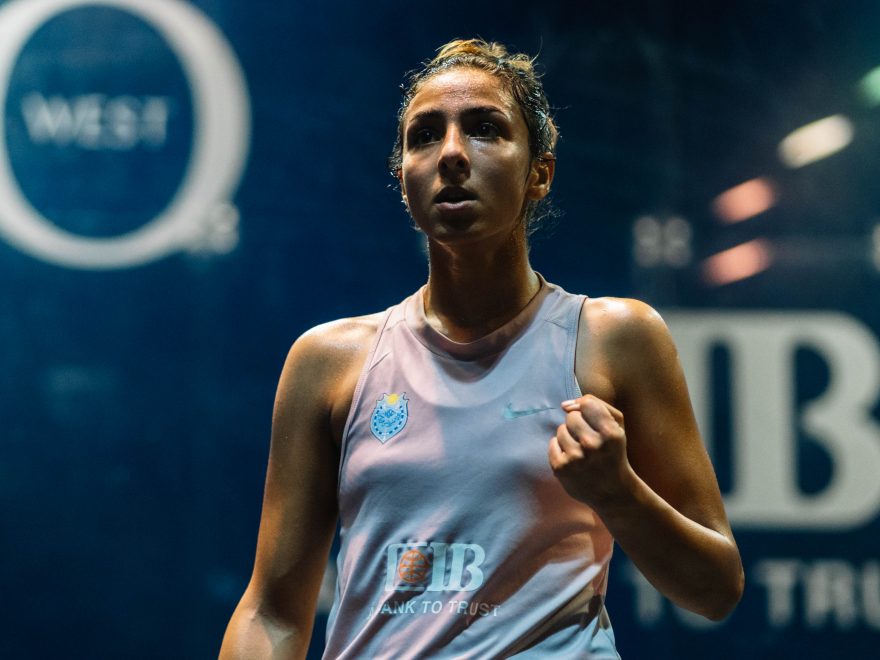 An all-Egyptian clash from the second round of the ToC, as 19-year-old Mostafa Asal took on World No.9 Mohamed Abouelghar.

The pair had never faced each other on the PSA World Tour, but ‘The Bullet’, who had reached the semi-finals of the Channel VAS Championships at St. George’s Hill in his last outing, was the clear favourite.

However, the 19-year-old Asal, who saw just outside the top 20 in the World Rankings, showed his qualities. His power hitting were too much for his countryman, and he took the victory in four games. Asal went on to reach the quarter-finals after defeating the returning Gregory Gaultier in the last 16.

Rowan Elaraby is another talented young Egyptian off the conveyor belt and the 19-year-old took the game to the more experienced Joelle King in Philadelphia.

‘TinkerBell’ had already disposed of the higher-ranked Victoria Lust in the previous round and came into the match brimming with confidence against the U.S. Open’s No.5 seed.

A dominant display from King in games two and three looked to set the Kiwi on course for a routine victory as she sought a place in the last eight, but Elaraby stormed back to claim a superb win which saw her reach the quarter-finals of a PSA Platinum event for the first time.

Another upset for Rowan as she continued her breakthrough campaign at the Windy City Open.

After reaching the quarters of the Platinum event U.S. Open, she carried out into Chicago. The Egyptian was also able to exact revenge for her defeat in Philadelphia.

The 19-year-old, who now sits at her highest ever position in the rankings at World No.15, was defeated by Nour El Tayeb in the U.S. Open, but she turned the tables in the Cathedral Hall of the University Club of Chicago, with a resounding performance in their second round meeting.

Rowan went on to then beat Lucy Turmel the next day to reach a second Platinum quarter-final of the season, where she ultimately lost out to English No.1 Sarah-Jane Perry is a tight affair, 3-2.

R2: Another comeback from 2/0 for Farida!

After getting the better of Scottish No.1 Lisa Aitken in the first round, Farida Mohamed moved through to World No.6 Joelle King in the last 32 of the CIB Black Ball Women’s on home soil.

The pair had never met on the PSA World Tour before, but the Kiwi asserted her class in the first couple of games, and it looked like she would take a resounding victory to reach the third round.

However, buoyed on by the home crowd, Mohamed pull off the impossible, and fought back from two down to win the match 3-2, in arguably the biggest win of her fledgling career to date.

CIB Hania El Hammamy and Nour El Sherbini faced off in the final of the CIB Black Ball Women’s Squash Open. No.9 seed El Hammamy had already faced an improbable task to make the final, in overcoming World No.3 Camille Serme in the third round, before then beating World No.8 Amanda Sobhy and World No.7 Sarah-Jane Perry en route to the final.

Despite the run she had through to the final, the 19-year-old was the underdog against the four-time World Champion, but she provided a performance for the ages, downing El Sherbini in the fifth game to take her maiden Platinum crown.

Hania comes back from 2/0 to stun Camille

The biggest shock of the 2019/20 PSA World Tour season came in front of the Pyramids of Giza, as Hania El Hammamy got the better of World No.4 Camille Serme to secure a place in the semi-finals of a major tournament for the first time in her career.

The pair had faced off four times previously, once in each of the last four seasons, with El Hammamy having only taken a single game from the Frenchwoman, losing 3-0 in the other three clashes.

La Panthère took the first two games with relative ease, but The Gazelle her way back into the match, and the home crowd buoyed her on to a wonderful victory, and she would only be beaten in the semis by the eventual champion, Nour El Sherbini.