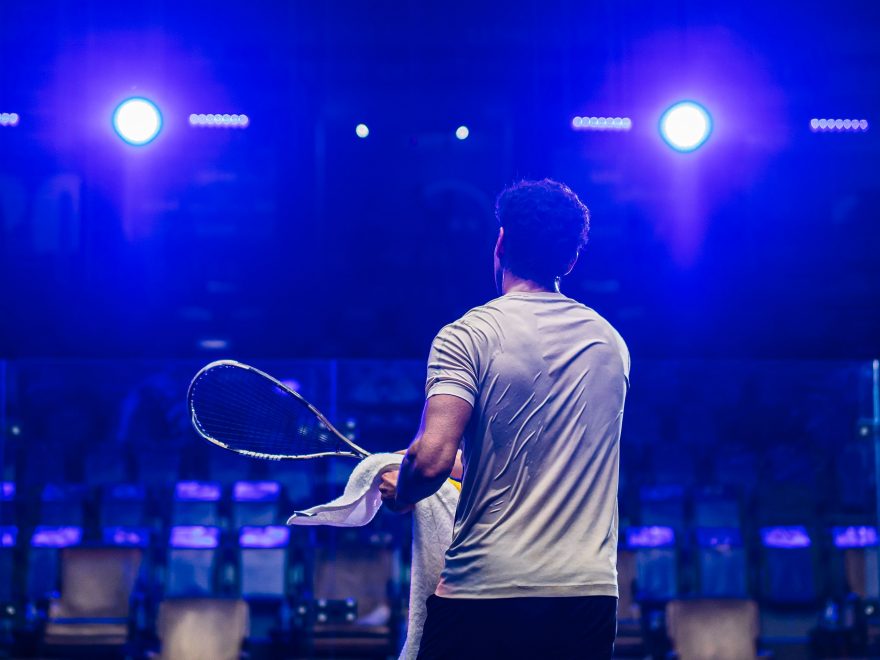 World No.41 Golden Boy Youssef Ibrahim, 21, appearing in only his fifth Platinum tournament, came back from match ball down in the 4th game, to cause one of the biggest upsets in Qatar Classic history earlier today, sending top seed Mohamed ElShorbagy out of the Qatar Classic third round.

Youssef put in the finest performance of his PSA career to date as he overturned a match ball opportunity for his opponent in the fourth game to draw level in a nailbitting tie-break where he had numerous game balls. He then seldom put a foot wrong in the decider to reach the quarter-finals of a Platinum event for the first time.

Ibrahim will line up against Alexandria Fares Dessouky in the next round. Both players are appearing in their maiden Qatar Classic quarter-finals, as Fares booked his last eight spot courtesy of a win over Spanish veteran Borja Golan.

Tarek Momen is also through to the quarter-finals following a 3-1 victory over 2005 Qatar Classic champion James Willstrop. Willstrop, 37, caused problems for Momen at times and won the third game, but the World No.3 found his game again in the fourth to complete an 11-8, 11-3, 3-11, 11-4 victory that will see him take on Welshman Joel Makin next.

Tarek
“As always it’s a pleasure to play James. He’s one of the incredible talents and it’s always very tricky. He could string a few points in five seconds and you find yourself 6-1 down and I had to dig deep to win that first game. Then when I felt I was comfortable and running away with the match, he came back at me in the third and snuck it in a few minutes.

“I tried as hard as possible to expose his movement a bit, I succeeded in some patches but in other patches my concentration levels were up and down. Overall, I’m happy with the performance and all credit to James, he played a great match today.

“I’ve been playing Joel Makin a few times recently and I lost the last couple of times. I definitely am looking forward to tomorrow’s match to make up for those losses and play much better squash. I felt like I didn’t play my best the last few times we played and I really want to make up for that tomorrow.”

“The word would be surreal. I don’t know how to describe how I’m feeling right now. I’ve been waiting for a break for a really long time and training really hard for so many years and I haven’t had a good win – this just makes it so much better.

“It’s a rollercoaster of emotions, to beat someone like Mohamed in his form and where he is now, top seed of the tournament – it’s just massive. I knew I was in for a fight, I had nothing to lose today. I put 100% into every shot in every game and I know he has a lot of experience, I had to be aware every game and when I took the lead, I usually squander the lead in so many matches, but against Mohamed I had to be on my toes the whole match.

“I will not doubt myself after beating Mohamed. I’ll just try to enjoy today and recover. I’ve played with Fares in practice matches, we play with the same fitness coach, so I know what to expect, we know each other’s game very well. He’s a talented guy but I have no pressure and I’m just going to enjoy it.”

“He is proving himself to be a very solid opponent, he was getting everything back, I’ve never seen a Malaysian that doesn’t move well – what are they feeding them over there! Beng Hee first, then Ivan and Nafiizwan and Yow, they move so well and it’s so hard to put the ball away. At the end I thought I would try to tire him out to see if it would pay off and it did. I couldn’t be more full of praise for him, he’s very talented but he also has the character to rise up the rankings and I’m really pleased to win in three today.

“Every athlete in any sport plays for, they want to be at the top of their game. It doesn’t end there though, if you don’t improve when you’re there, you’re not going to sustain it for long. You enjoy it for a moment and then you have to get on with your business, train even harder because you know everyone is aiming for that spot.

“At the tournament I don’t think about it, you just take it one match at a time. Yesterday was a tough match, today was a very tough one as well and tomorrow, whether it’s Miguel [Rodriguez] or Diego [Elias] that’s going to be tough as well, if not even tougher – so I just have to focus on that.”

Fares
“He’s a very good player. Very talented and dangerous as you could see in the second game, I was leading 8-1 and then he came to 9-9. Maybe today, it’s my day and he had a very good career, a great player. I’m really glad I’m through. The court was a little dead and it suits my game more, I think.

“During the quarantine I took a bit of a break from social media, I was focused more with my family and life. I was talking with fans and trying to keep in touch with everyone.”

“Before this match, I was aware of our matches before. But I also know that I’m a different player compared to what I was six months ago. I was just thinking about our match today, I’m really pleased with how I played. I was moving and my length hitting was on point today, really happy as well to finish in three so I’m fresh for my quarter final match tomorrow.

“I’ve been playing well so I’m not really concerned about the [strict COVID-19] measures. We are very thankful to the events that are able to host events – Manchester, CIB in Egypt and the Qatar Squash Federation – all of those events we are very thankful for. It’s really hard to host events anywhere in the world, especially right now with what’s happening, we are just really happy to be here. Even if the measures are a little bit strict, I’m just blessed to be able to be playing a squash event at this time.”