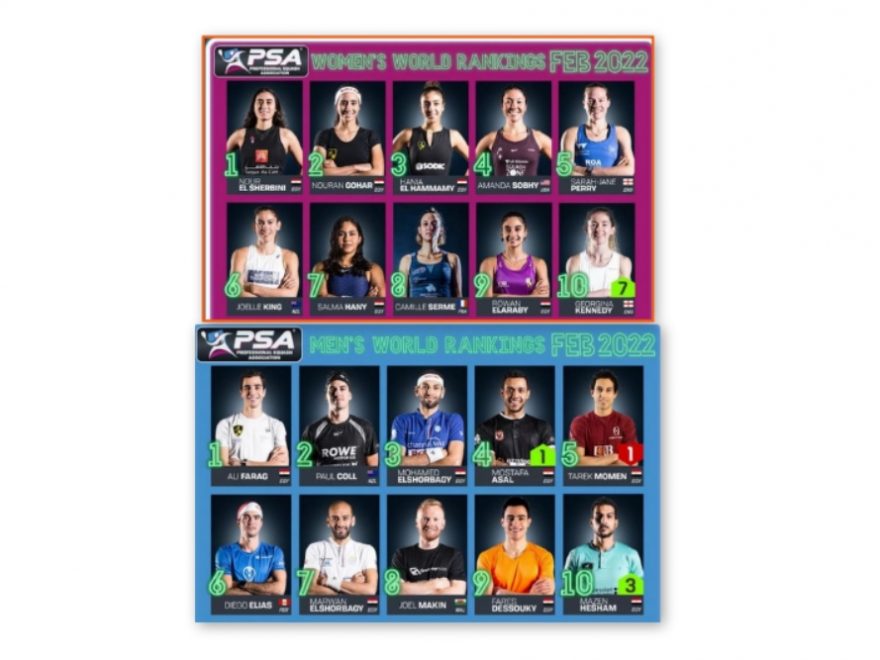 The rankings are once again topped by Nour El Sherbini, who extends her reign as World No.1 to a 16th successive month. The Egyptian is followed by CIB Nouran Gohar (No.2) and CIB Hania El Hammamy (No.3). Then we find CIB Salma Hany (No.7) and CIB Rowan Elaraby (No.9).

Nadine Shahin is No.16, ) and Hollie Naughton (No.17) also drop due to Kennedy’s rise. Emily Whitlock stays at No.18, while both Melissa Alves and Danielle Letourneau move up to No.19 and No.20, respectively.

It’s a career-high ranking for Alves and comes after CIB Nour El Tayeb fell from No.19 to No.81 due to her points for the 2020 Manchester Open and CIB Egyptian Open expiring. El Tayeb gave birth to a baby girl in July of this year and ended a 14-month spell on the sidelines in December, 2021 as she reached the quarter finals of the CIB Squash Open Black Ball.

As for the Men, CIB Hesham Breaks Into Top 10 of PSA Men’s World Rankings

The Black Falcon has broken into the top 10 of the PSA Men’s World Rankings for the first time following his run to the final of the Houston Open in January.

The 27-year-old has struggled with a number of injury problems in recent years – even dropping out of the top 50 in 2017 after previously reaching a career-high of No.13 two years prior – but was in magnificent form to reach a first PSA World Tour Gold final last month in Houston, and he has been rewarded with a three-place rise to No.10.

The man he lost out to in the Houston final – CIB Ali Farag – stays at No.1 for a sixth consecutive month and a 26th month in total and he is followed by World No.2 Paul Coll. Coll will usurp Farag at the summit of the World Rankings on March 1, with Farag set to lose ranking points from the 2020 Qatar Classic and the 2020 CIB Black Ball Squash Open at the end of this month.

Mohamed ElShorbagy stays at No.3 ahead of his return to the court at the Squash on Fire Open later this month following a four-month hiatus. Meanwhile, Mostafa Asal has risen above former World Champion CIB Tarek Momen to reach a career-high ranking of No.4 after he reached the semi finals in Houston.

CIB Marwan ElShorbagy is No.7  and CIB Fares Dessouky (No.9), while CIB Karim Abdel Gawad falls at No.13, while CIB Mohamed Abouelghar stays at No.14. Youssef Soliman moves  up two places to a career-high ranking of No.16, closely followed by CIB Youssef Ibrahim who falls two spots to No.17.