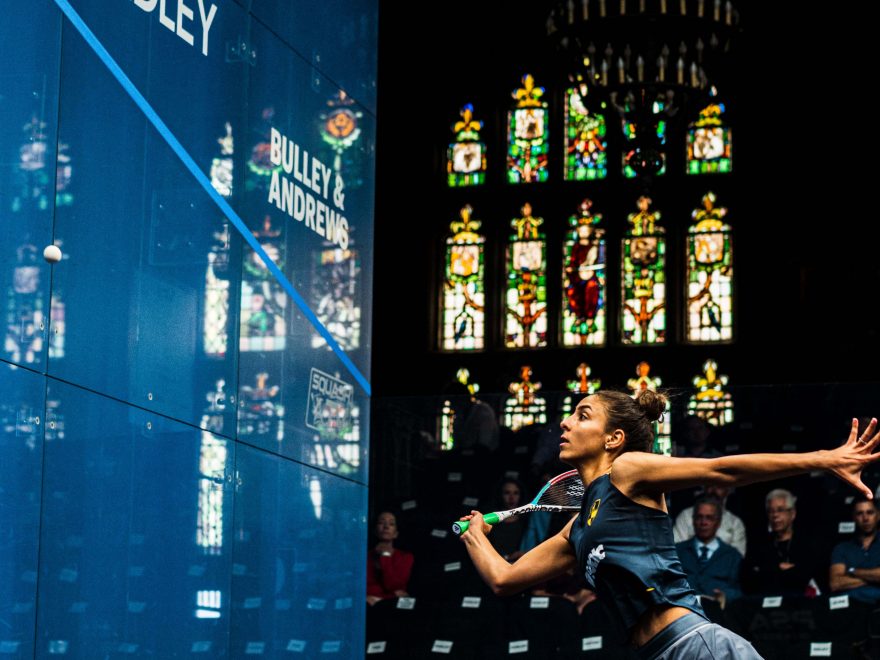 Mohamed ElShorbagy is now just one win away from overthrowing CIB Ali Farag as the men’s World No.1 following an 11-6, 11-7, 11-5 victory over World No.7 CIB Fares Dessouky, back from an injury that prevented him from playing at his best level. ElShorbagy will take the No.1 spot in the August rankings if he reaches the final, while a defeat to Coll in the semi-finals would leave Farag needing to win the event to hold onto the coveted ranking.

The form book is certainly in ElShorbagy’s favour with eight wins to Paul Coll’s one, however Coll did claim his sole win over the Bristol-based Egyptian at the University Club of Chicago during the 2020 Windy City Open.

In the women’s event, The Terminator CIB Nouran Gohar continued her charge to the World Championship trophy and the World No.1 spot as she dispatched New Zealand’s World No.8 Joelle King by an 11-5, 11-7, 8-11, 11-7 scoreline.

Nouran will take the World No.1 spot from El Sherbini if she matches or beats her compatriot’s results at this tournament, meaning there is still the tantalising prospect of the pair facing off for the ranking and the World Championship crown in the final on Thursday.

“I have so much respect for Fares because there is so much that happens behind the scenes that not many people know about. He wasn’t fully prepared for this tournament and there are things as squash players we understand, and I could see he couldn’t lunge as much as he would have liked too. He didn’t really complain, he got on with it and gave everything he had. He didn’t complain on social media like other players sometimes do, he just gave it his all.

“This is the sign of a champion, thank you for not giving me an excuse before the match, but I’ll give it to you now.

“I came here for two jobs, to get World No.1 back and to win the World Championship. There is one more match for the first job and two more matches for the second job. I’m really looking forward to that.

“I’m not waiting for Ali’s results, I know what I’m capable of. I missed most of last season last year and I lost World No.1, so I wanted to remind everyone of The Beast. A lot of people seem to have forgotten how I’ve played most of my career.

“To all of my opponents, The Beats is back, and I’m not going anywhere.

“Paul is the most physical player on the tour and I don’t think one match is going to affect what happens tomorrow. In El Gouna, I had the tougher draw and dealt with the final better than him, right now he’s had the tougher rounds. He’s class, he’s a great player and I have a lot of respect for him.

“I had it easier, I had Shabana, Darwish and Ramy who did it before me, but he had no one. He’s a great guy, we trained together when we first got here, but tomorrow is not going to be like a training session.

“I am just happy that I was able to stick around. Sometimes I wasn’t finding my length, but I was really happy to adapt again in the fourth game, finding some good shots, obviously Joelle played well, coming back in the third with a change of tactics. I really enjoyed the match, it was fun to play.

“Sometimes, the conditions you have to adapt to. The court can sometimes be a little bit cold or warm. I think it was a bit dead today so I had to adapt and play more short shots. I am just happy with the way I dealt with it.

“I think I have played Camille in one or two World Championships quarter-finals, and I always enjoy playing against her. It is really tough and we have great battles so I am really looking forward to it tomorrow.”

If Nour was dominant – a little wobble in the second – it was an incredible intense 4 setter for Tarek Momen against one of the most dangerous players out there: Marwan ElShorbagy is not only extremely skilled but also superbly strong mentally.

Both players stayed focused at all time, didn’t challenge the ref, and let the squash do the talking. Great match.

Ali Farag
“It’s so good to have Diego back on tour.

“He’s such an addition to the tour in terms of style, in terms of geography, in terms of everything. It’s not great to play against him though. We had a strategy in mind because no matter how hard you train, match fitness comes from matches.

“I knew he hadn’t played many matches in the past few months, so I wanted to make that first game long. I was a little silly with a few errors that helped him, so I knew I shouldn’t change anything in the second aside from eliminating those errors. He was reading me well from the front, so I started lobbing more to see where he was and to move him around.

“I’m very glad to run away with the third, he was coming back strong and if I’d have lost it the dynamics would have been totally different.

“Tarek and I have have gotten closer since Nour got pregnant. We’ve been talking about similar experiences and he’s been giving me advice about how to be a good dad and husband to a mum. You saw how well he played today, he’s so quick to the front two corners and he puts the ball away very well.

“I’ll have to contain him in the front two corners, and if I’m able to do that I’ll give myself a chance.”

“It was a rollercoaster type match. I stared the first two or three points really well but I was so confident in my short game that I decided to only play to the front which didn’t work against Marwan. He just took a step in front of me and won 11 straight points. I had to regroup after that first game, change my gameplan and build some rallies before I went short and I think I did that until 8-5.

“That one rally, I kept beating myself up about it because I had the winning shot but I played it right on his racket. Then he is so quick at rattling points. One second I should have been 9-5 up, the next we are now 9-9. It was really tough for me but I am very proud with how I handled my nerves after losing that match point and going game ball down. I did really well to come through and win this match.

“I had to forget about the score, that was the first thing. I had to remember the game plan and just focus on the point I was playing. I think I did that pretty well. I was a bit nervous and edgy but I just tried to think what the right thing to do was, and I managed to get a few of those right.

“I will probably switch off for tonight and if I want to watch the Farag-Elias match, I will watch it tomorrow. For now, I just need to recover and see what is going on. I will see how it goes!”

“I have been playing SJ in the quarters in every tournament now and it seems like the second game, there is always a problem in it! It is a huge difference being 2-0 up to being a 1-1 game so I always want to win the second

For me, this tournament is very important and once I reach the quarters, I tell myself it is a new tournament, and to forget the last few rounds, to start fresh again. I wanted to get myself ready and play my game, find my shots in this match and I did that really well.

“At the end, we just spoke about the ball and the court. We have a great respect for each other. SJ is always fair and it always a clean match every time. The chat was just making sure that the ball and court was the same thing for her as it was for me. It was a great match, and it is always fair to play SJ.

“Fingers crossed, I am trying to do my best and just to play my best squash. On to the semis now and I will try to focus and going the same way I am. Hopefully, the next two matches, if there are two, will be good!” 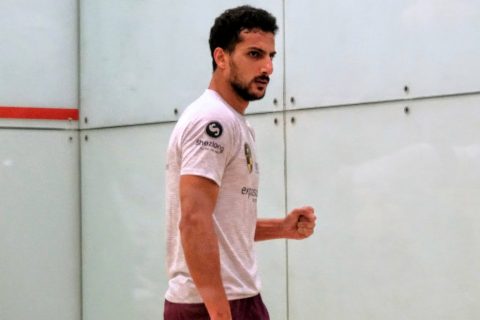