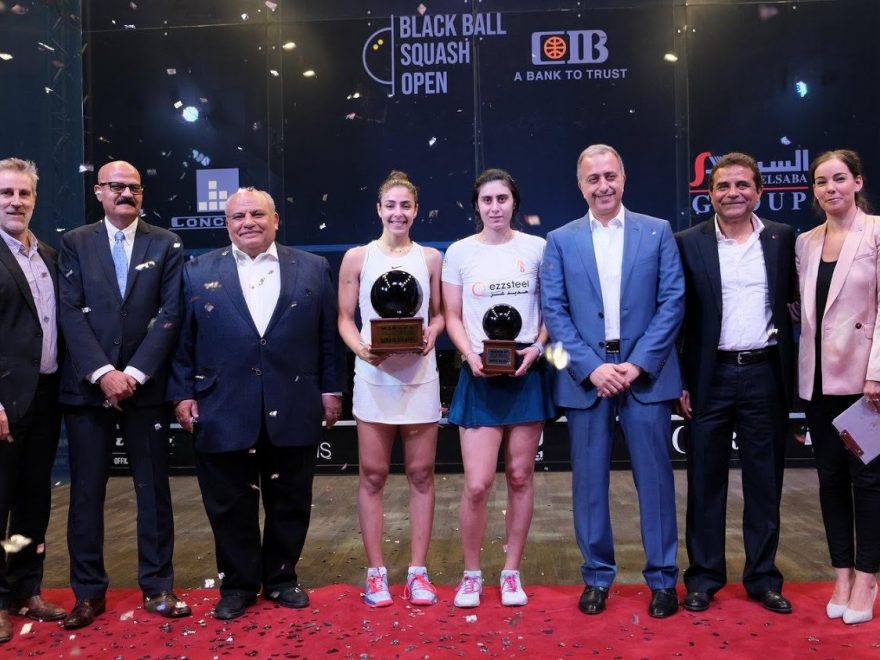 I think briefly about those few dinosaurs that still wonder if women squash players should be paid as much as the men “cause they don’t work as hard, do they and it ain’t as good as us men”. Well, I wish they had been with us this week, and in particular from the quarters onwards.

Nour El Sherbini comes back from Sports Hell. After repeated surgery on her knee, with all the worries/hard work that it entices, she also had a bad flu during Chicago that she fought along Raneem, clinching the title 11/9 in the 5th, as you do. Like last year’s edition of BlackBall, she arrived here on the back of a major – it was the worlds last year that she won – and yet, like this year, she reached the final. What to say about this talented young lady. World Junior champion on her third attempt, having taken Camille Serme out of the CIB World Champs back in October in the quarters, only to lose against her 11/9 in the 5th in Chicago, she reiterated her Pyramids performance, this time in 4 games, (13/11, 13/11 in the last two) in the third round. Beating the world number 3, check.

Then she faced the immensely talented Amanda Sobhy in the quarters who she had never beaten, beating the world number 8, check.

In the semis, the Gladiator was waiting for her, that was a five-setter match, beating the world number 7, check.

A very interesting question was asked by Tamer Mamdouh, from Heliopolis: did the world champ and the world junior champ ever met in the final of an major? well, apparently it did, British Open 2016, final betwen Nour El Sherbini WC and Nouran Gohar, WJC…. Incredible Egyptians…

Eleven minutes for the first game. Hania starts well, 3/1, she makes three errors in a row – that will be the only errors of the game, 4/4. Again she is in front of Nour that looks a bit flat, asking the court to be cleaned at 8/4 down. Hania is looking very relax, sure of her tactics, and takes the opener,11/6 on a last incredible rally. 6 unforced errors for Hania, 3 for Nour, and a stroke.

But it wasn’t the turning point of the match, although it did look like it when Nour went zooming up 8/4. Despite getting penalised – a bit harsh it seemed but what do we know – with 5 strokes, and only one to her advantage, Hania turned the tables, to claw back to 9/9.

Game ball for Nour, saved with a superb drive clinging to the wall, and a huuuuge scream, 10/10, and with that momentum, she comes back from 7/9 (where she hiccup-ed last game) to take that one 13/11 in 13m with again an absolutely ridiculous rallies to end all ridiculous rallies.

What do you say about the 5th? Not much really. You probably go on SquashTV and watch it!!!

Nour takes a good start, 3/0, 5/1, 6/3. It looks, like I said, that Hania has quite logically and understandably hit the wall. And at 9/4, the writing seems to be on the glass wall. How on EARTH did she managed to claw back to 9/9, I honestly do not know.

That’s the moment Nour choses to tin a return of serve, match ball Hania. A sublime backhand redrop 10/10. And another one, 11/10, match ball Nour. A backhand volley drop shot for Hania, saved, 11/11. An incredible error AGAIN on her return of serve for the world champion and it’s another match ball for Hania, 12/11, who finds a winner that Nour cannot get to. Hania showed today how much of a fighter she is and how much of a good and up coming player she is, actually, not upcoming, she is here! She’s now there and has won her first Platinum event.

Of course I’m disappointed to lose, but it’s been very tough for me, playing a lot of tournaments back to back, so I’ll try to forget this one and move onto the next one.

I’m happy to finish, what is hopefully not our last tournament of the season, in Egypt and in front of a home crowd, we couldn’t have a better end of a tournament than this one.” This morning, I was just hoping to play a good match, not like in the World, after beating Camille where I just didn’t show up. I just wanted to enjoy my first ever Platinium Final, and hoping to look good on court, and prove to myself I’m not too far away from the top girls.

Today, I knew I had to be strong mentally if I wanted to beat somebody of the pedigree and calibre of Nour. So I kept pushing myself…

My game plan was extremely simple, pushing my shots to the back, and if she played a loose shot, take it short and test her movement. But I had to be very accurate as we know how extraordinary talent Nour is with her racquet, and any average shot – not even a bad one – she would kill and play winners out of everywhere.

I think I’ve played the toughest matches of my career this week. I’ve put in a lot of effort this week to win this title. I’m really proud of what I’ve done this week and hopefully I can keep going and keep making the same effort. I worked on my weaknesses, I improved my physical game, my squash game and I’m really pleased to be beating the top players now. I’ve played against Nour a few times and they were all straight-games. I kept learning from each match and playing against a four-time World Champion is not easy at all, she’s a fighter and a champion, I’m really really happy to beat her today.

I want to thank my parents, of course, my lucky charm, my grandma is here today, my cousin and my friends and I want to thank them all for being here today. My coach, Haitham Effat, I want to thank him for everything, we have been working together for 4 years now – all my coaches, Fitness coach, Sami Farag and also Ahmed Abdel Khaled have done an incredible job with me and I’m really happy to have them here with my today.

Of course, I want to thank my sponsors, CIB and Uncle Hussein Abaza who has been helping me, helping us so much, doing so much for us, the  Heliopolis Club, Tecnifibre, the chairman of BlackBall Club, Eng Ahmed El Abd, for making it all happen, and the crowd for coming today, and throughout the week, despite the virus and the weather!!

I just wanted to make them proud…

We caught up with @HaniaaElHammamy right after she won her first Platinum title at the @BlackBallSquash 👏#squash #BBSO20 pic.twitter.com/1Imil0UsVa