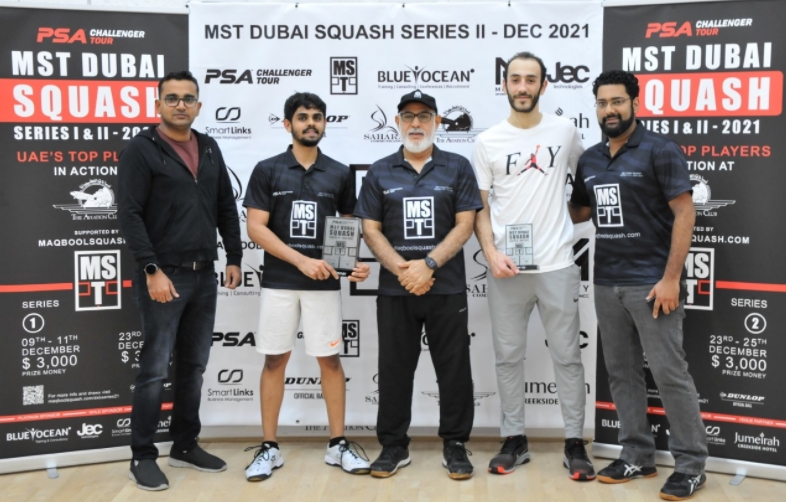 Coming through a mammoth 85 minutes encounter, 2nd seed Abdelaziz Hegazy made it to his first PSA Tour event, defeating 7th Muhammad Waseem of Pakistan in the Semi-final of the MST Dubai Series II which is being held at The Aviation Club in Dubai.

The seesaw battle started with both players trading the initial points and being level at 4-all in the first. Hegazy then made a break taking a 7-5 lead and finishing the game 11-6. After being tied at 8-all in the second, Waseem fought back to level winning a 11-8. The third was similarly contested with the pair playing point for point till 7-all, then an unforced error and three winners from Hegazy saw him take the lead once again winning 11-8.

Waseem once again leveled taking the 4th 11-8 and pushing the match into a decider. The two had already been on court for over an hour at this point and showed no signs of slowing down. A very tense fifth game saw Waseem take an early 4-1 lead but Hegazy fought back to level the scores at 8-all.

Displaying patience both players increased the pace yet kept their error count down with Hegazy breaking through at 8-all to win the next two points and take himself to matchball. Waseem hit a winner of the serve and a mistake from Hegazy saw him save two matchballs and then have one of his own at 13-12 but an error from his racket saw Hegazy level the score at 13-all.

After 85 minutes of play, Hegazy was able to convert his next match ball winning 15-13 to book his place into his first PSA tour final against the top seed, India’s Sandeep Ramachandran.

The second event of the MST Dubai Squash Series got off to a smooth start at the Aviation Club in Dubai on the 23rd of December, 2021 with results along expected lines and the only upset of the day being caused by Egyptian teenager Omar Afifi, the unseeded player, beating 6th seeded Nikolai Denisov of Russia in straight sets.

Playing each other for the second time in two weeks Omar restricted his older opponent this time around keeping the ball tight and minimizing opportunities Denisov had to attack. A spirited fight from Denisov saw him reach game ball at 10-8 in the third but Omar held his nerves to take the next three points and make his way to the quarterfinals for the second time in two weeks. The 30 minutes match provided ample entertainment to the spectators in a contrast between youth and experience.

Omar Afifi’s opponent in the quarterfinals will be 2nd seed, Abdelaziz Hegazy, who dispatched Omar’s younger brother and wild card of the event, Aly Afifi in three very entertaining games with the youngster displaying flashes of brilliance with the racket and his speed.

Earlier in the evening the crowd was treated to a very closely fought match between another Egyptian, 8th seeded, Zeineldin Shams and Indian’s Barath Balaji which went the full distance. Losing the first and second 11-8, 11-5, unseeded Balaji made a comeback taking the next two 11-6 and 11-8 to push for a decider. Going point for point in the fifth, Shams edged it 11-8 to make it to his first PSA quarterfinals and will now play the event’s top seed and winner of the MST Dubai Series I, Sandeep Ramachandran of India who brushed aside his compatriot Sampuran Banerjee in the straight sets.