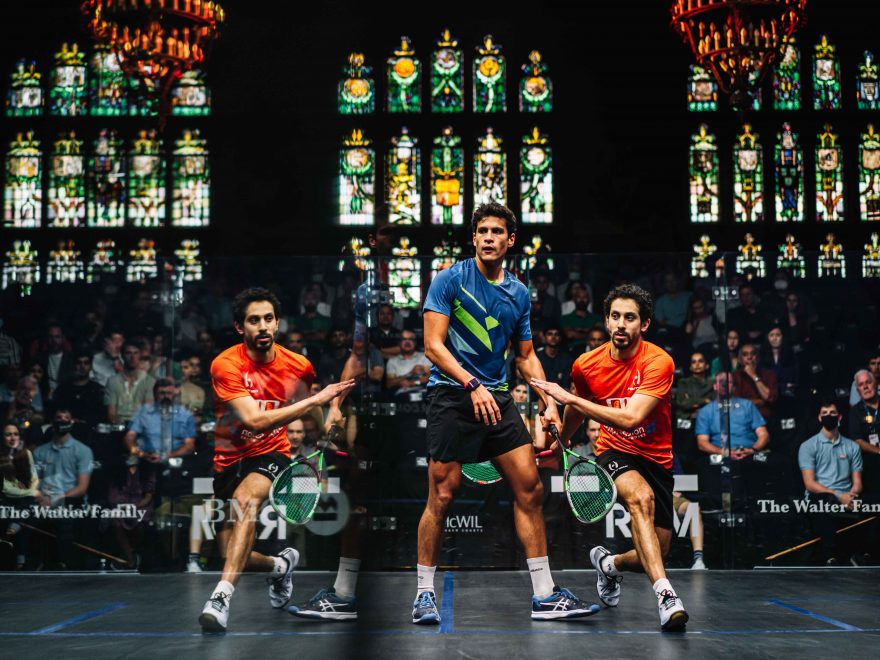 World No.1 and reigning champion Nour El Sherbini had to battle in the second game in particular against home player World No.20 Olivia Fiechter, 25 yo. But the Princess found the winners when she needed them to close out an 11-4, 14-12, 11-7 victory.

World No.5 CIB Hania El Hammamy will play Amanda Sobhy after she defeated World No.14 Nele Gilis in a highly-entertaining three-game contest where the Gazelle displayed some incredible physical and mental prowess.

In the men’s tournament, World No.1 CIB Ali Farag continued his title challenge with a 3-0 win against Colombia’s Miguel Rodriguez to set up a last eight meeting with Peru’s Diego Elias, who beat George Parker of England.

The spectators inside the University Club of Chicago’s Cathedral Hall were treated to some typically explosive rallies from Rodriguez, who wowed the crowd with a full-length dive in the first game, but the World No.11 couldn’t match Farag’s accuracy.

Reigning World Champion CIB  Tarek Momen also took a step closer to the final courtesy of an 11-2, 11-9, 11-8 win against fellow Egyptian Youssef Ibrahim. World No.5 CIB Marwan ElShorbagy stands between Momen and a place in the semi-finals after he defeated Frenchman Gregoire Marche.

🗣 "It’s always an honour and a pleasure to share the court with Miguel."@AliFarag pays tribute to @MiguelSquash following his win over the Colombian Cannonball in Chicago tonight 🎥#PSAWorldChamps pic.twitter.com/qVY8cDphL9

“I wasn’t expecting the match to go that way.

“He’s had an amazing career already, World No.4, the British Open champion, and I knew it was going to be tough today. I had a gameplan in mind, which I put together with [coach] Mike Way, and I always say I feel most comfortable when Mike is around. We spoke about little things I needed to do to start the match well, and I never lost momentum.

“It’s always an honour and a pleasure to share the court with Miguel. He’s getting younger every year, and we’re happy to have him on the tour for as long as we can. We don’t have many guys that dive as much as he does, and it was on the third or fourth points, I thought that if he did that through the entire match I would be in trouble today.

“The good thing about Egypt is that we have so many players to play every day, and we do match play and it gets us ready for this. But no matter how much you try, you can never replicate the same intensity in practice matches. This is where experience kicks in, and I’m glad I’m one of the older guys on tour now, and I can’t believe I’m saying that.

“So is Miguel, and I think I coped with the way he plays pretty well today.”

“I obviously feel good about making it into the quarters but that was weird to be honest. It was a really exciting match but it was not what I had in mind, not to that extent, where it was like serve, volley, winner like in tennis.

“There was no rhythm today and I am so glad that the drop shots worked today because otherwise I would have been screwed. I wanted to build some rallies, play some longer rallies than what we had but I had to find a way to win, do what’s best for me to win and today, that was the best way to do it, to volley whatever I can, get it short from the serve. It worked and Youssef is a very talented guy, he could have chopped me up, so I am glad that I got through in three games.

“Playing a lefty is different because there aren’t many of them! After Shabana retired, there is literally Youssef and Kandra, those are the two I can think of. You have to move to the other side and build rallies on that side, but I am comfortable with playing on both sides of the court. For me, it is about how I feel on the day. Today was a different story though, we didn’t need to play on either side, we played at the front for most of it. Happy to get through, get the rest day and then be ready for my quarter-final.

“I came into this tournament, I have my eyes set on that trophy again, I want to win it just as bad as I did the first time. I am not thinking about being defending champion. It is something I have, it will always be mine, forever, so I just need to have more good memories and win more titles. For me, it is a new tournament and I am just trying to win it.”

🗣 "I think I needed a tough match like this to get myself ready."@noursherbini catches up with @MichaelAbsalom to discuss a tricky match against @OliviaFiechter1 🎤#PSAWorldChamps pic.twitter.com/ySQY8mLDIf

“She was very tough, first time playing each other despite being the same age, we need had the chance to play each other. She pushed me very hard until the last point. Actually, I think I needed a tough match like this to get myself ready and wake up my body a little bit. I lost a little concentration in the second game but I am really glad I won in three in the end and that is the most important for me.

“You have to be mentally strong so you don’t lost four or five points after each other. That’s where I lost my focus in the second game. She kept fighting and she got the lead in it. That is the thing for me, I had to regroup and focus to try and win the game so I wasn’t in a situation where it was 1-1, so that was what I was telling myself, to fight.”

Marwan ElShorbagy
“It was very fast paced which suited him more. Greg is a great player and he has improved a lot this season. I came here knowing that this would be a tough match because he is a great player. You saw his performances at the World Tour Finals, he is up there with the top players, he can win anything.

“I also saw his performance in Qatar as well against Paul [Coll] and he has been giving the top four players a hard time on court. I am really glad with how I came back after that first game. I played well in the first but I got my tactics right in the second.

The way I approach the game, going for nicks and that is not my natural game, I like the accuracy, that is my joy and passion, it is my game. I like the accuracy and the movement side of the game. It works well especially on this court, and I am really looking forward to tomorrow’s day off and then ahead to the quarter-finals!”

🗣 "The turning point was in the first game when I was 6-0 down."@HaniaaElHammamy talks through the key points from her clash with @NeleGilis with @MichaelAbsalom 🎤#PSAWorldChamps pic.twitter.com/Zqvr5FPbeq 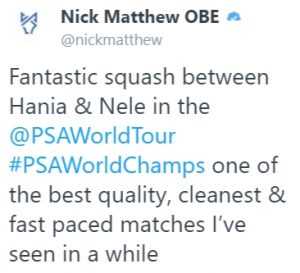 “From my point of view, the turning point was in the first game when I was 6-0 down. That was the key and I am glad I managed to fight hard against Nele. Who doesn’t love a physical match and this one was very physical so I am really glad to come from behind and win the first.

“A very big positive if that I was able to beat Nele in three. That is a very good sign for myself and it shows that I am ready and I think today was a match that gives me confidence and I am really looking forward for the rest of the tournament.

“I played against Nele and I beat her in five, it was really physical. It was 80 minutes, and today’s match was long for three. Playing against her, it is such a physical match. I am sure the crowd loved it, I loved and I think Nele enjoyed it as well. The crowd was amazing today as well!” 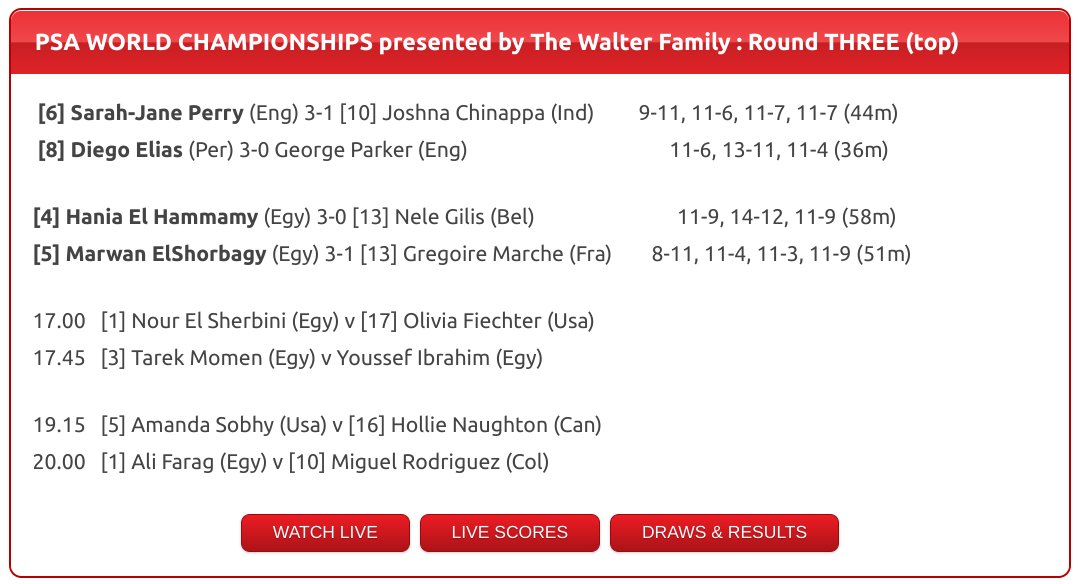