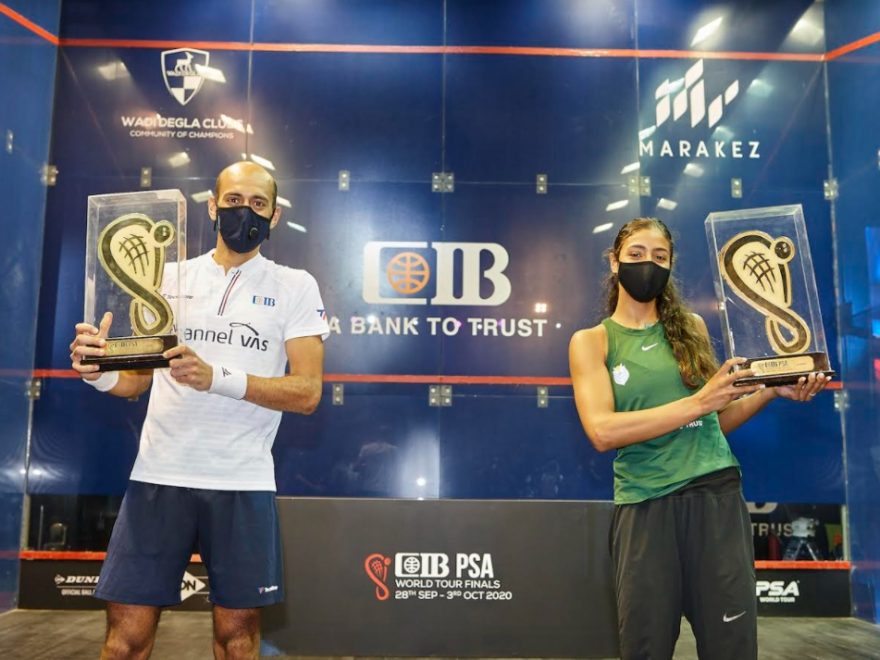 CIB Egyptian duo Hania El Hammamy and Marwan ElShorbagy added their names to the rolls of honour at the prestigious CIB PSA World Tour Finals after they claimed respective wins over Nour El Tayeb and Karim Abdel Gawad in the women’s and men’s finals earlier tonight at Cairo’s Mall of Arabia.

The CIB PSA World Tour Finals brings the curtain down on the 2019-20 season after being postponed from June, 2020 due to the COVID-19 pandemic. 20-year-old Hania El Hammamy has become the youngest female ever to win the prestigious title after completing an incredible come back from two games down against El Tayeb.

El Tayeb came into the match off the back of winning the Manchester Open last week – the first event following the six-month suspension of the PSA World Tour – but El Hammamy was appearing in her second final in her last three tournaments after claiming her maiden PSA Platinum title at the Black Ball Open back in March, which was the final event before the suspension.

El Tayeb had won six of their previous seven matches and the match looked to be going according to form as she played some immaculate squash to go two games ahead.

But El Hammamy has a mental resilience that belies her tender years and the World No.6 struck back in the third to claw a game back. That rattled El Tayeb, who went off the rails completely as El Hammamy stormed to an 9-11, 9-11, 11-9, 11-4, 11-3 triumph to lift her sixth PSA World Tour title.

Like El Hammamy, ElShorbagy has lifted the second major PSA title of his career and his first since the 2018 El Gouna International after taking out reigning champion Gawad by an 11-6, 11-5, 11-3 margin.

ElShorbagy has been in red-hot form in Cairo this week and finished top of Group B, with a 2-0 defeat against World Champion Tarek Momen – in a dead rubber after he had already qualified for the semis – being his only defeat of the tournament.

Gawad is a specialist in Egypt and was appearing in his fifth successive final on home soil, but he was blown away by the World No.7’s tactical nous and control of the racket and had no answer to a rampant ElShorbagy.

They will next be in action at the CIB Egyptian Squash Open between October 10-17, which is the first Platinum event to take place since the restart of the PSA World Tour. The tournament will be held in front of Cairo’s iconic Great Pyramid of Giza.

🗣 "I'm over the moon, I can't believe I actually did it from 2-0 down against @NourElTayeb!"@HaniaaElHammamy reacts to her stunning comeback against Nour El Tayeb in the women's CIB PSA World Tour Finals title decider 🏆 pic.twitter.com/rTpaSVtCfi

🗣"My performance couldn't have been any better today… I knew I could play at this level, I was just waiting for the right moment."@maelshorbagy reacts to his title win at the CIB PSA World Tour Finals 🏆 pic.twitter.com/7BfzQYeT4l

Pure 🔥 from @maelshorbagy this week in Cairo 👏

It takes something special to beat @karimabdelgawad in Egypt – and ElShorbagy was on form to axe the defending champion to get his name on the men's CIB PSA World Tour Finals trophy 🏆 pic.twitter.com/jcWYw3tPdm 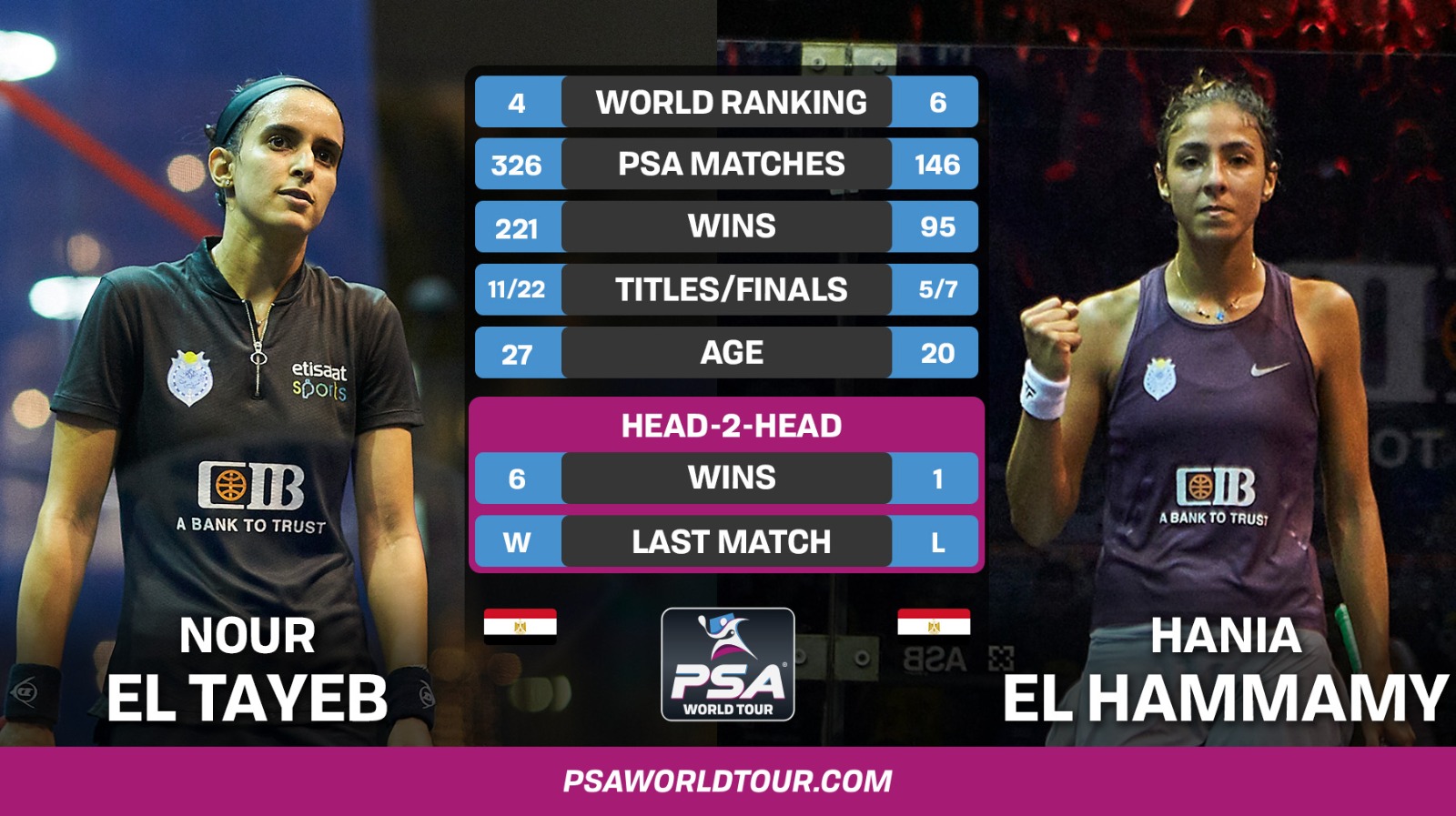 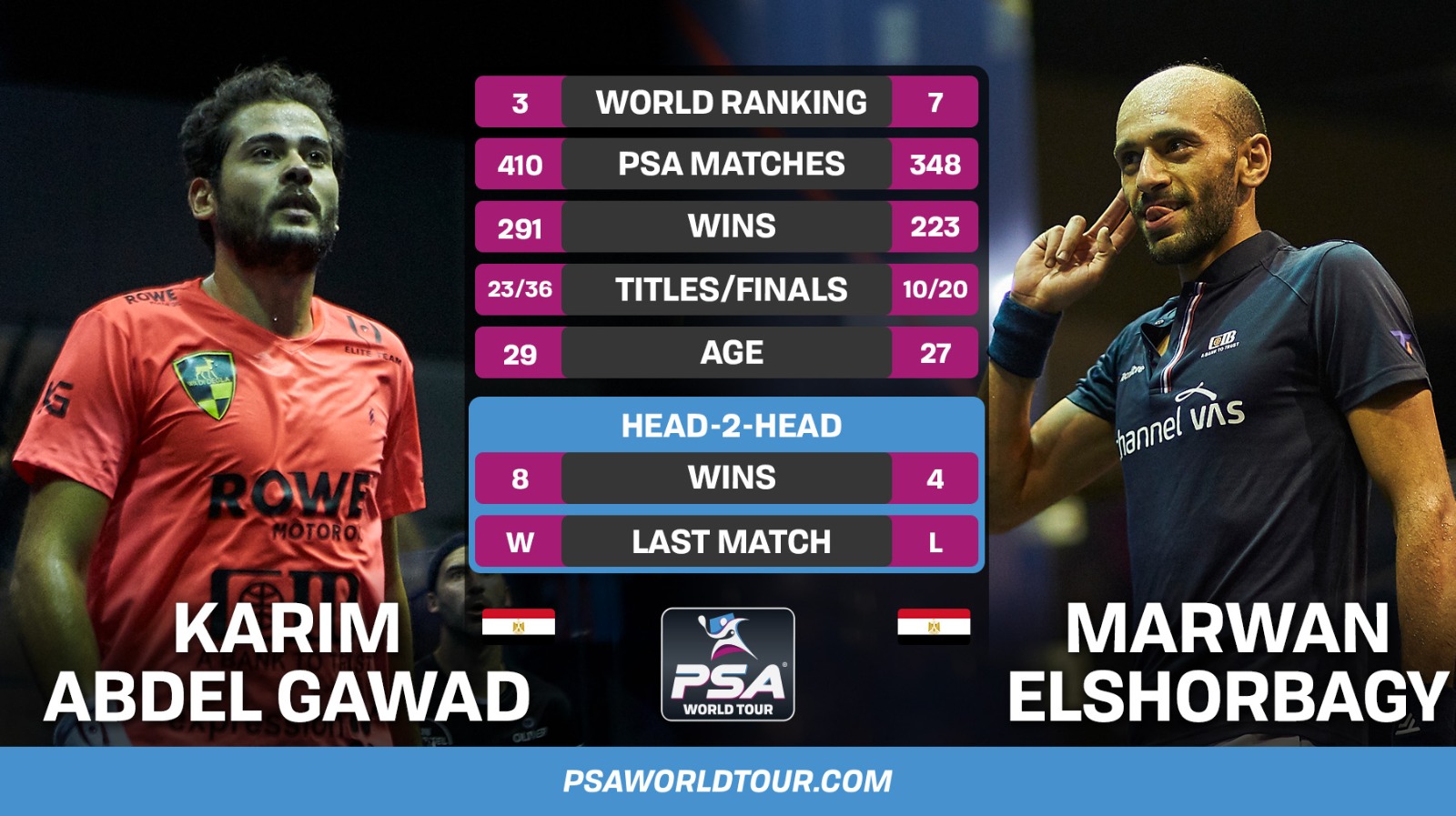 Two all-Egyptian finals are set in Cairo after a dramatic set of semi-finals at the Mall of Arabia.

CIB Nour El Tayeb came from a game down to beat top seed Nour El Sherbini, who had been in imperious form up to tonight’s final two games. CIB Hania El Hammany also came from a game down, losing a mammoth first to Joelle King before overpowering the Kiwi in the decider. 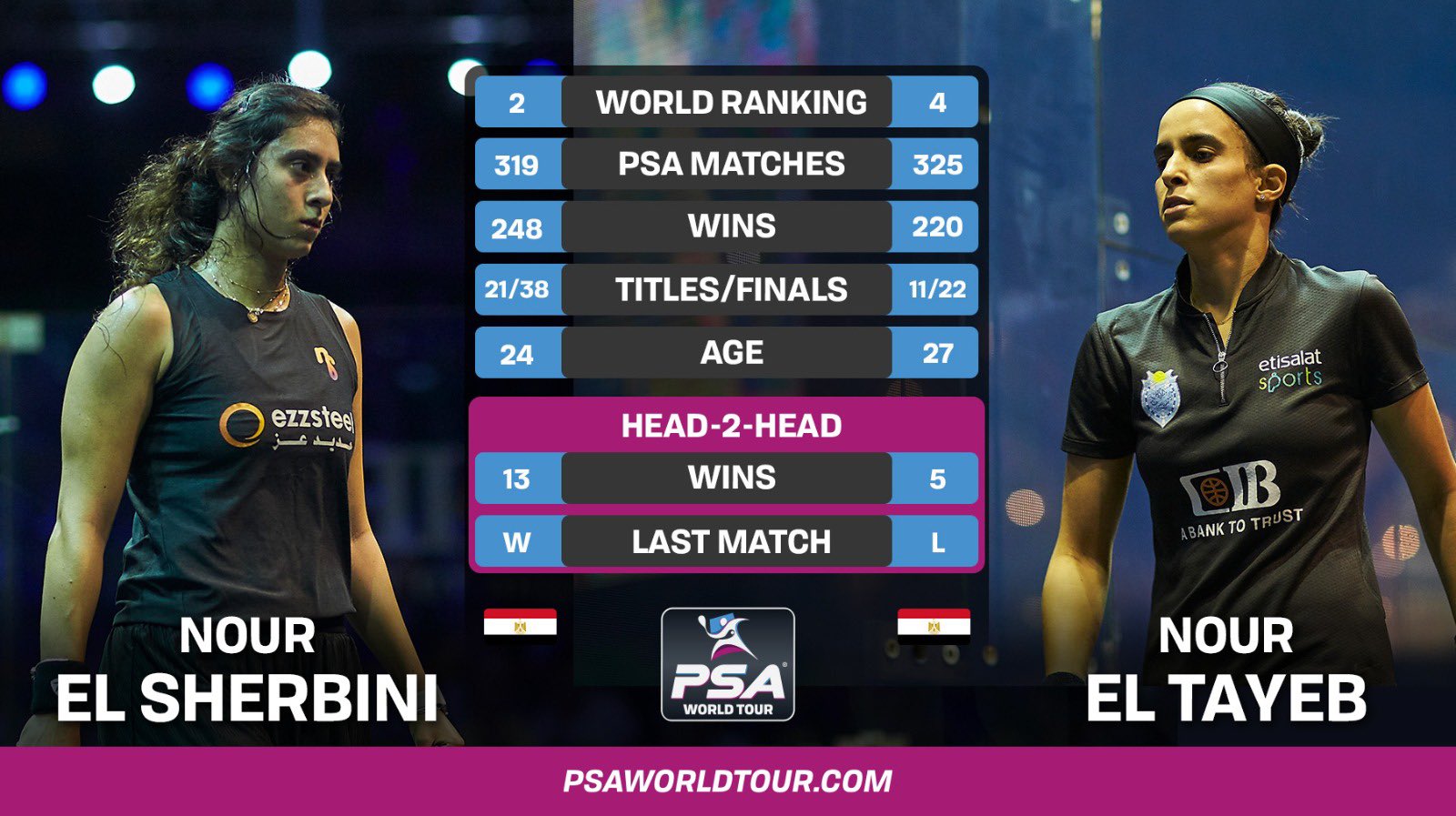 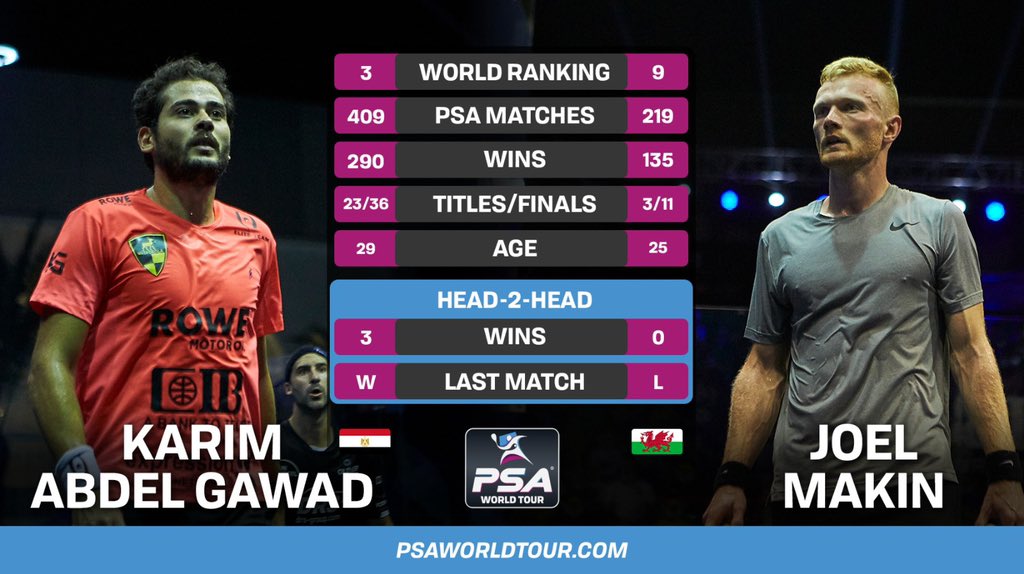 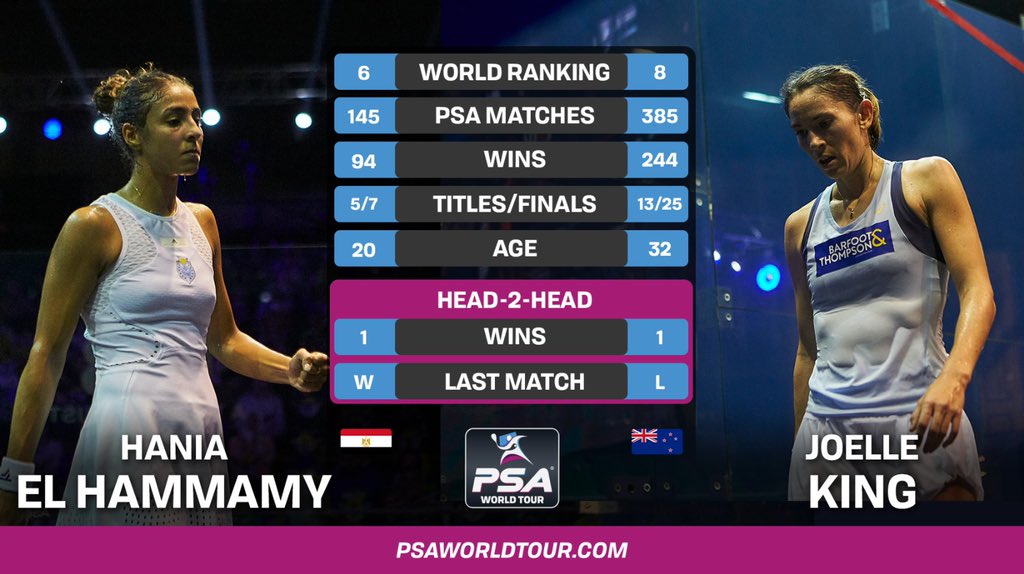 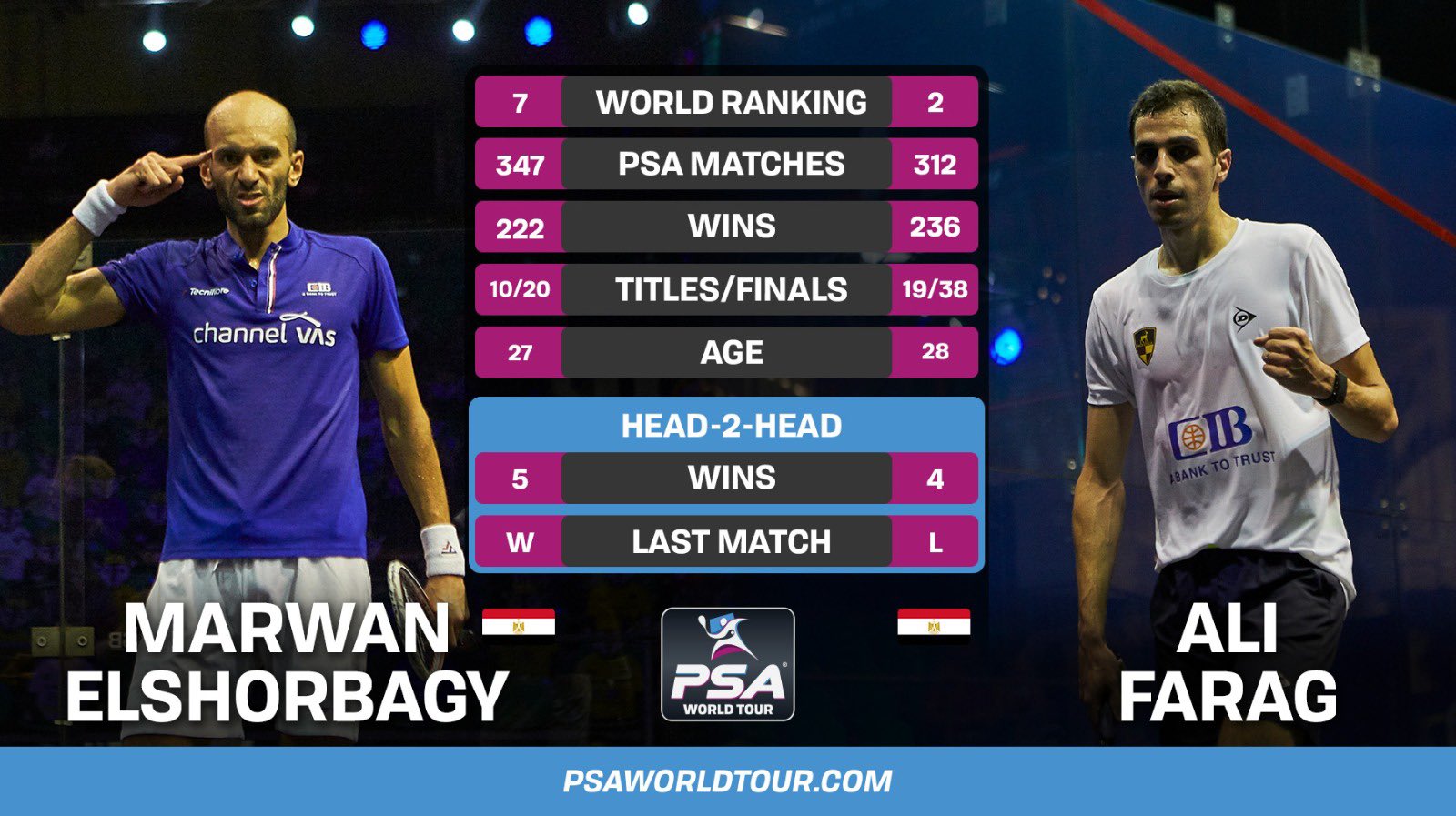 New Zealand’s Joelle King sent World No.1 CIB Nouran Gohar out of the CIB PSA World Tour Finals at Cairo’s Mall of Arabia earlier today to book her place in the semi-finals of this tournament for the first time. It would seem the BO3 suits Joelle as her only win in their last four meetings came at this event back in 2018 at Dubai’s Emirates Golf Club.

It was a straight shootout between the two to join Group A winner Nour El Sherbini in the semi-finals. And King, a day after her 32nd birthday, recovered from four game balls down in the opening game to take the lead and match in two games.

King’s semi-final opponent will be No.5 seed CIB Hania El Hammamy, meaning there will be a guaranteed first-time finalist in the women’s event.

Hania finished top of Group B, a point clear of World No.3 CIB Nour El Tayeb despite a 2-1 defeat to her fellow Egyptian tonight. That win kept El Tayeb’s hopes of semi-final qualification alive and she faced an anxious wait in the hope that US No.1 Amanda Sobhy, who was bottom of Group B, could upset France’s Camille Serme.

Sobhy hadn’t beaten Serme in seven encounters, with her last win against the World No.3 coming back in 2014. But the American duly delivered her best performance of the tournament so far to put her first points on the board, meaning Serme misses out on a place in the last four.

Makin, winner of Paul Coll in two straight games,  will take on Group A winner CIB Karim Abdel Gawad in tomorrow’s semi-finals after the former World No.1 got the better of Germany’s Simon Rösner by a 2-0 margin.

Gawad finished level on eight points with World No.2 CIB Ali Farag at the summit of Group A, but finished top as a result of his superior head-to-head record over the top seed at this event having beaten him in the previous group match.

The other men’s match took place in Group B, with Tarek Momen getting the better of group winner Marwan ElShorbagy 2-0 to leapfrog Coll into third place.

Day One over with two upsets as Tarek and Karim lost…

Women’s World No.1 CIB Nouran Gohar and World Champion Nour El Sherbini will lock horns in Group A of the 2019-20 CIB PSA World Tour Finals as they do battle for the prestigious title at Cairo’s Mall of Arabia between 28th September and 3rd October. The PSA World Tour Finals features the best squash players on the planet, with players needing to secure either a top eight finish on the CIB Road to Egypt Standings or win a PSA Platinum tournament to earn their place at one of the most unique tournaments on the PSA World Tour.

A $370,000 prize fund will be split equally across both the women’s and men’s events as players compete in a best-of-three games group stage between September 28 – October 1. The top two from each group qualify for the knockout semi-finals, where a place in the best-of-five games title decider will await the winner of those fixtures.

Gohar will take to the court as the World No.1 for the first time following her ascent to that coveted spot during the COVID-19 enforced suspension of the PSA World Tour. She will line up against El Sherbini – who finished top of the Road to Egypt Standings – England’s Sarah-Jane Perry and New Zealand’s Joelle King.

King finished outside the top eight on the Road to Egypt Standings, but qualifies after defending champion Raneem El Welily, who finished second, retired from the sport in the summer. Meanwhile, World Championship finalists Tarek Momen and Paul Coll will go head-to-head in Group B of the men’s event. Momen, who overcame Coll to get his hands on the biggest prize in men’s squash last November in Qatar, heads up the group and the pair are joined by World No.7 Marwan ElShorbagy and Welshman Joel Makin, who makes his first appearance at the PSA World Tour Finals.

World No.2 Ali Farag heads up Group A in the men’s event and will be joined by defending champion Karim Abdel Gawad and Peru’s Diego Elias. Germany’s Simon Rösner, who qualifies after Road to Egypt Standings leader Mohamed ElShorbagy chose not to play due to personal reasons, takes the other spot in that group.

Group stage action will begin on Monday 28th September at 18:00 (GMT+2). Six matches will be played per night for the first four days of the event until the group stage has drawn to a close.

Every match from the tournament will be shown live on SQUASHTV (rest of world), Eurosport Player (Europe only), ON Sport (Egypt)​,  the PSA Facebook page (excluding Europe and Japan) and multiple mainstream broadcast channels around the world.