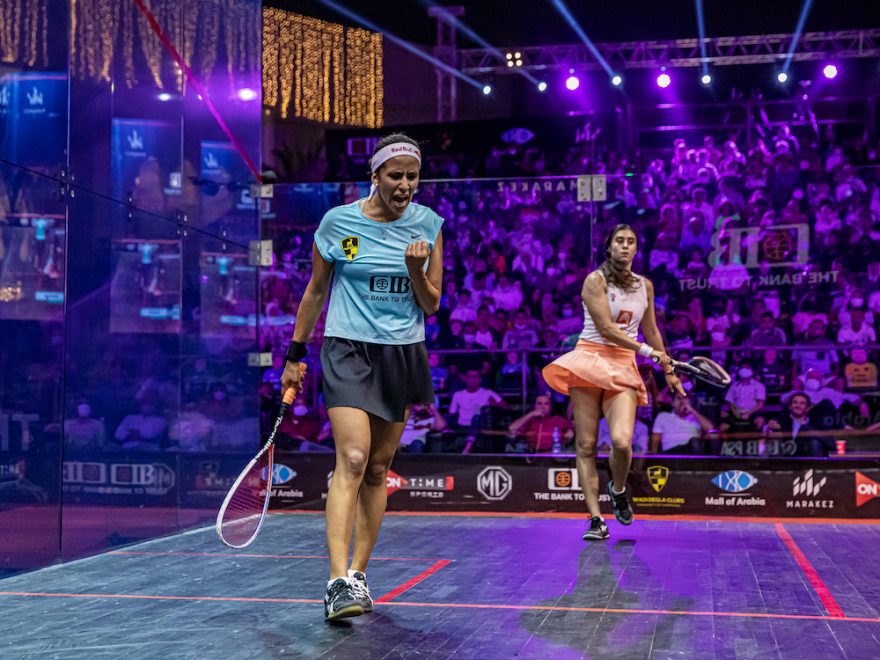 World No.2 CIB Nouran Gohar ended a three-match losing streak to World No.1 Nour El Sherbini to send the top seed crashing out of the event.

Nouran had already qualified from Group A of the women’s event and came into the match having only won one of her last four matches against the four-time World Champion, with that win coming in the group stage of the 2018-19 World Tour Finals.

El Sherbini edged the opener on the tie-break, but Gohar came roaring back to win 10-12, 11-7, 11-8 in 52 minutes, which sees her qualify top of Group A along with Camille Serme, who needed Gohar to win to qualify for the semi-finals.

Gohar will take on New Zealand’s Joelle King in the semi-finals, while Serme will play defending Hania El Hammamy in the latest chapter of their enthralling rivalry after she beat King 2-0 to top Group B.

World Junior Champion Mostafa Asal ended a six-match losing streak to World No.1 CIB Ali Farag to finish top of Group A ahead of World No.2 Mohamed ElShorbagy.

Asal outclassed Farag in a coming-of-age performance and the 20-year-old won 11-4, 11-6 to set up a semi-final fixture against World Champion Tarek Momen in his first World Tour Finals.

World Champion CIB Tarek Momen is the other men’s player through to the last four courtesy of a 2-0 win over Joel Makin that was punctured by a lengthy break in the first game due to humidity making the court floor slippery. Momen will play Asal for a place in the title decider.